In large part thanks to the aid of automated translators, I routinely write emails or post on Facebook in either English, German, French or Spanish, with a smidgen Italian thrown in now and then. I’m only fluent in two of those languages, happily guessing my way through the others, killing grammar right and left as I pick lovely sounding words from vocabulary meadows fertilized by Google Gülle. It happens occasionally that I mix several languages in the same mail or post. When I’m really lazy I may insert into or copy to my mail segments taken from apps like ‘translate.google.com’, ‘Wordreference.com’, ‘app.grammarly.com’ or ‘canoo.net’. I am a poor speller in any given language and I appreciate these electronic helpers very much. It also happens  that I can’t for the life of me think of an appropriate term in the language in which I’m currently writing while it pops freely into my mind in any one of the others. Oddly enough, that happens most frequently when I try to write in my mother tongue. The most accurate and precise word in English is readily available while the matching Goethe-speak is painfully absent. This evening though, I had the opposite experience during our pre-dinner walk through the quiet, shaded corners of Old Town on a summer’s eve.

Eventually, we tracked over to less serene quarters, namely Cours National, our main street, to buy the daily dinner baguette. Bread in hand we encountered several acquaintances gathered in a sidewalk café for apéro. We were asked to join them and soon lively conversations in a variety of languages ensued, during which I just couldn’t recall needed English terms. Not just once but several times. Must’ve been the beer.

But back to the lunacy in question. Opening Facebook, I found a reply to a comment I had made previously. Trying to answer, linguistical mayhem ensued. I wrote my remarks in German with a tiny bit of Spanish thrown into the mix. Every time I ‘clicked’ to post my response, an EnglishGoogleGibberish automated translation appeared. From that moment on, Google has regarded my wall as a Spanish language page and keeps offering to translate the whole thing as soon as I open Facebook. I’m registered as a US user and I was located in France when the ominous incident occurred. Therefore, it’s a bit of a mystery, why the forces that so sneakily dominate are day-to-day lives persist in forcing Spanish on me … 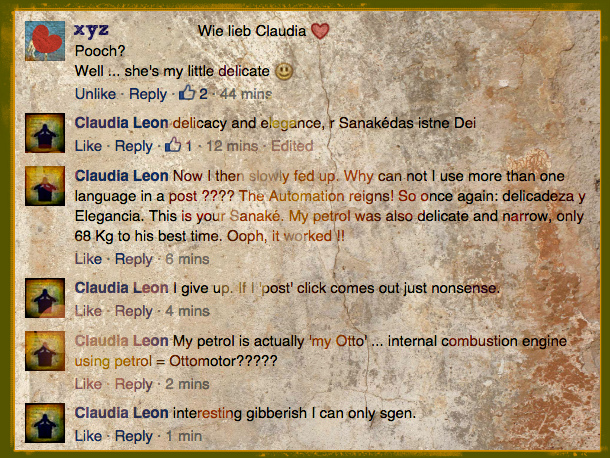 Our integration into the French Social Security System has worked a whole lot better than Facebook, fortunately! We both now have a French Social Security Number and have become part of the National Health System. We have each chosen a medécin traitant, a family doctor or attending physician, according to personal preference. Mine is a female généraliste with whom I feel very comfortable while my husband chose a physician who speaks English fluently, which makes him feel more relaxed in a consultation. Through my physician, I’ve started physiotherapy this week to combat my back problems. My kinésithérapeute, whom I selected by calling every darn physiotherapist in the phone book until I found one who was in walking distance and took new patients, seems to be doing a great job for my back, while satisfying his curiosity about his new client of murky origins. Asking me many questions regarding my provenance, if not pedigree, I eventually threw in a “so many questions, Monsieur”, to which he replied, “Vous êtes atypique, Madame”. One could translate that to “You’re not quite normal, Dear.” or “Your lifestyle is highly unusual”. Take your pick! Either way I enjoyed a sunny walk home, miraculously relieved of my earlier back and leg pain, truly enjoying the new summer plantings in our public “beds” all across town.

Saintes is one of only 211 four-flowered “Villes Fleuris” across the country. It’s called the label of quality of life and the 4-flower designation signifies the community’s commitment to green spaces, city parks, and floral doodads everywhere, and we’re darn proud of our landscaping!

For now, I’ll leave you with a Charente river summer picture taken from our living room window and best wishes for a good weekend.