One day in Chicago recently, my mom-in-law and I were walking back from a window shopping excursion to our home-exchange apartment in the Streeterville neighborhood of downtown Chicago when we passed the MCA. What is it? she asked me. The Museum of Contemporary Art, I answered. I want to see that, she said. So we went.

The main entrance of the Museum of Contemporary Art at Mies v.d. Rohe Way is fronted by a tall & intimidating set of concrete stairs, which are, despite being touted as a “signature” feature of the museum, a little much for elderly joints. But we soon discovered the street level lobby of the adjacent admin building with elevators into the museum space. We checked our coats and I took a picture of mom to commemorate our outing to the MCA.

We immediately stumbled into a decidedly contemporary show, the Keren Cytter Exhibit. An Israeli woman working in Berlin, making crazy lo-fi videos in the manner of such controversial cinematographic figureheads as Pasolini and gaining international recognition along the way as a multi-facetted multi-disciplinary  artist.

Growing up in Europe, I learned to appreciate the nouvelle vague filmmaking of such directors as Truffaut, Godard, Buñuel & Chabrol. These filmmakers of the post WW II area of protest and explicit existentialism, often tied into an emerging Gentleman-Marxism, expressed, aside from an admiration for Hitchcock, a profound respect for directors like Fritz Lang and Ernst Lubitsch, whilst the art of these great masters in turn was deeply influenced by Max Reinhardt, for whom my own grandmother worked on stage in Berlin in the twenties. Come to think of it, almost a hundred years ago. Anyway, in her video exhibit here in the MCA, Ms. Cytter merges these iconic film cultures in her videos clips, which are projected into darkened, hollow, echoing rooms. An exhibit neither welcoming nor comfortable to comprehend.

Entering the Cytter gallery, we walked past a museum guard, before stepping into a room with work lights trained on a shelf supporting reading material pertaining to Cytter’s body of work. 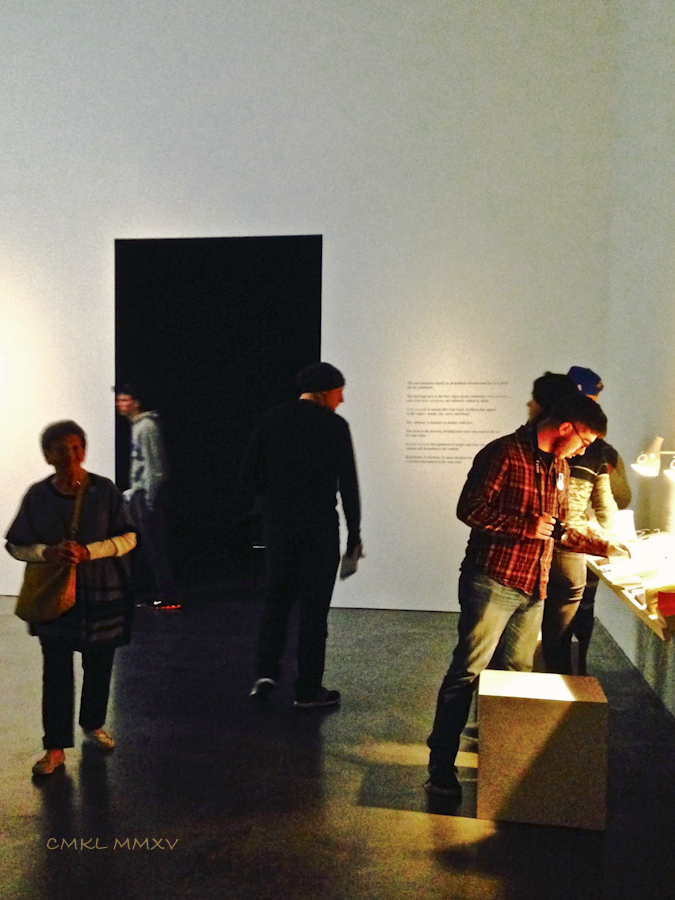 Mom mingled with the crowd while I took some pictures. Gradually the visitors disappeared into the exhibit. 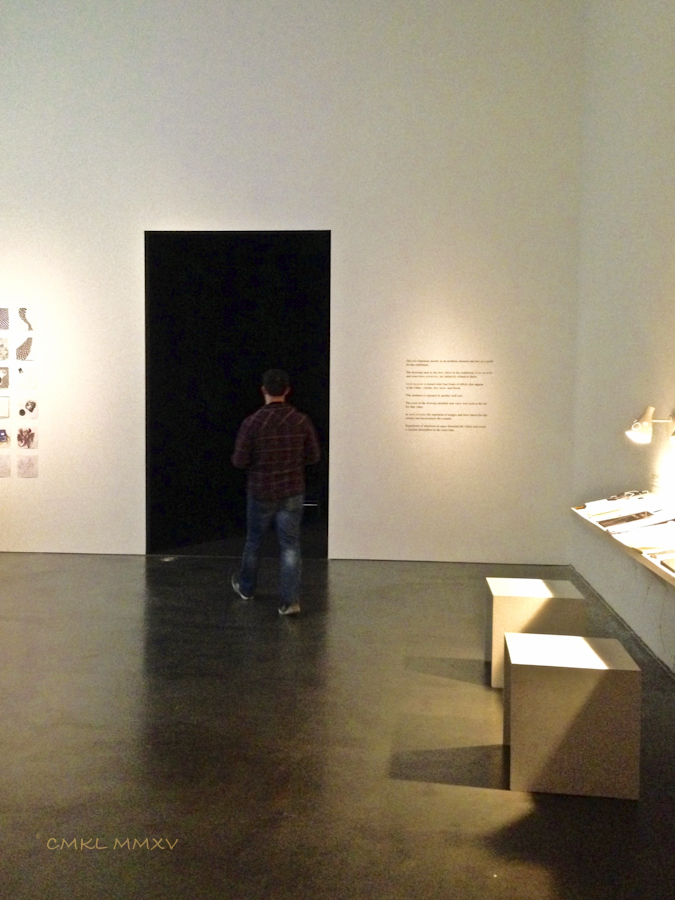 Somewhat hesitantly we also entered the dark space of the gallery proper. 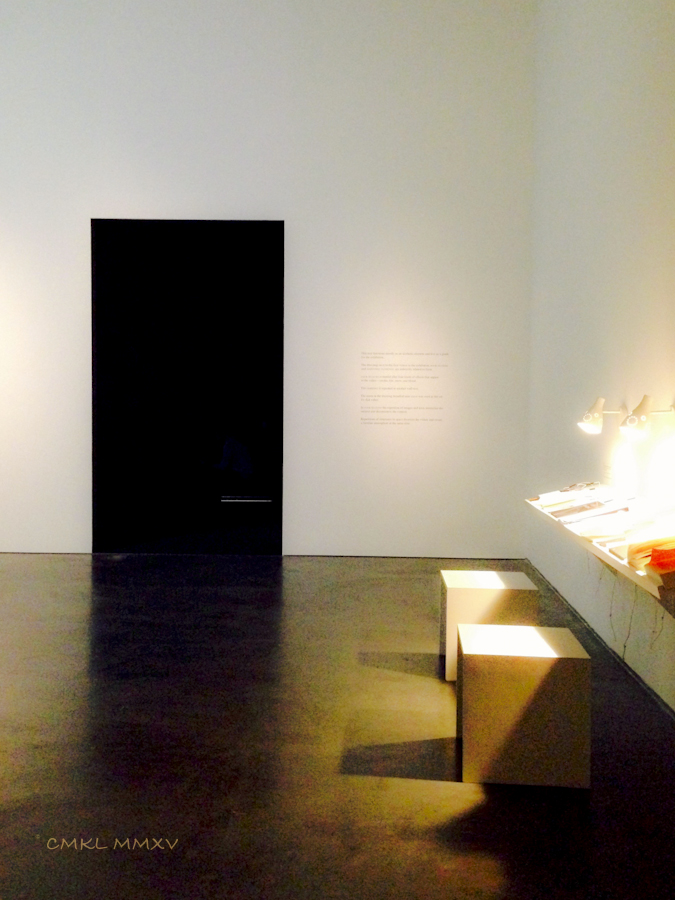 I was tense and apprehensive inside the black maw of Ms. Cytter’s imagination. To some degree because I felt I had to protect my defenseless Jewish nonagenarian mom against the cacophony of germanic sounds reverberating in the opaque lacunae of a violent Cytter universe.

We exited rather abruptly into rooms, which seemed to replicate the ones we had just left. 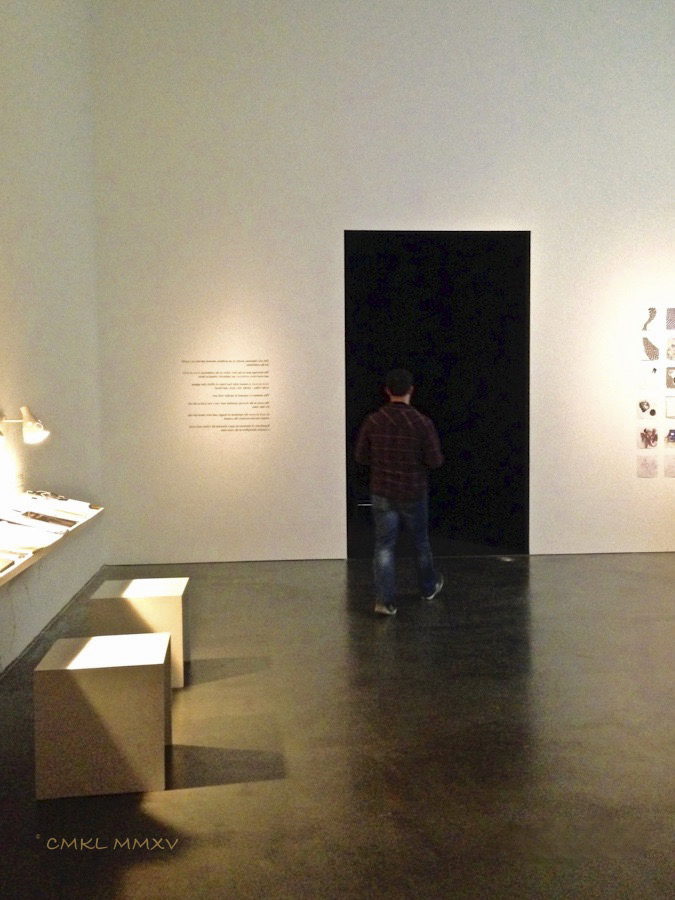 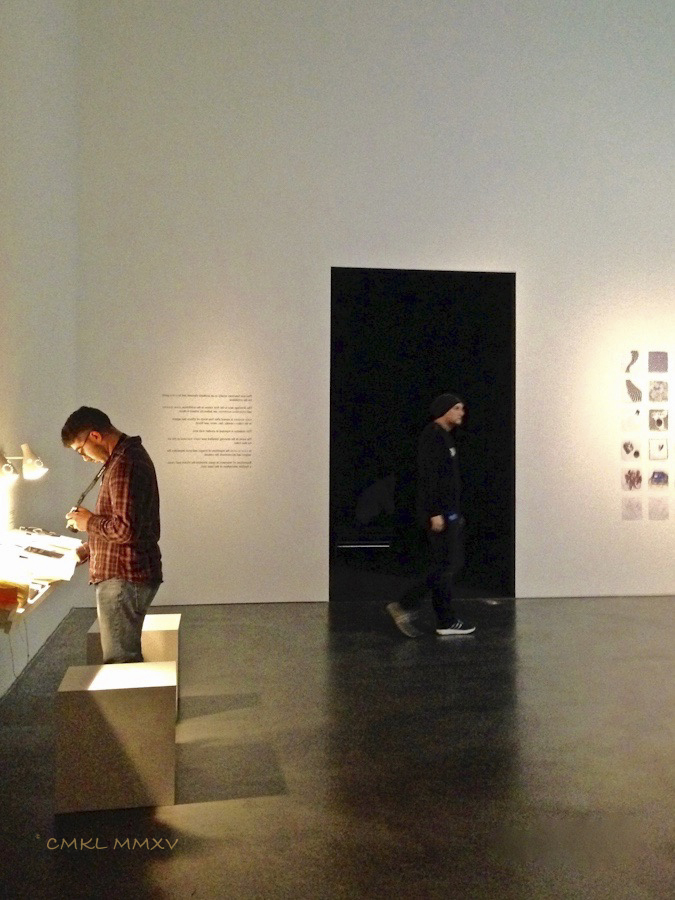 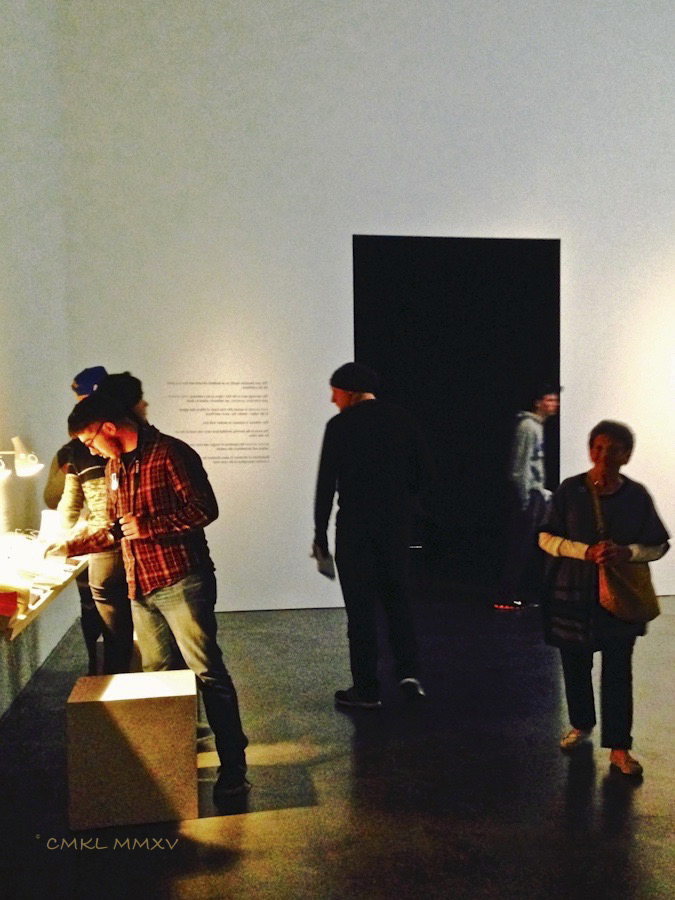 It was the guard’s appearance that gave me the initial déjà vu jolt when we stepped back into the brighter post exhibit room. He looked very much like the one in the gallery’s anteroom we had left behind only minutes before. The men resembled each other very closely in build and age, both had shaved heads and full beards. But, as mom immediately noticed, this one had one arm in a cast. Ms. Cytter would indubitably be pleased about our confusion! Only after the fact did I read this line in an exhibit introduction:

Oh yes, those repetitions certainly disoriented these visitors! Especially with the museum’s double whammy of sneakily assigning guards to the gallery, who could be twins. Well done MCA! Still waiting for the familiar atmosphere to develop, though.

Relieved to have escaped the HitchcockianCytterSpace we entered another gallery to become absorbed immediately in the slow dance of two security guards, their soundless ballet reminiscent of a two-toned full body poetry reading in American sign language. Following so closely to our deconstruction across the hall, I suspected these guards to also be part of performance art in aid of disorientation, but it was just two human beings haven fun. To go with the theme of deconstruction of familiarity, the two museum guards agreed to pose for me right in front of an installation of a baby blue urinal, which, in a way, was a Throw-Back-Thursday experience for me, since one used to encounter these nautilus-shaped pissoirs at every street corner when I was a child. Granted, usually a good deal smellier than this pristine specimen.

Another installation supervised by our red and green dance team was a sadly stranded hot air balloon and an ever narrowing pathway or tunnel or birth canal thingy that was supposed to force one’s aggressions out in the open while walking through it. Didn’t seem to work, sorry.

we proceeded to The Freedom Principle. 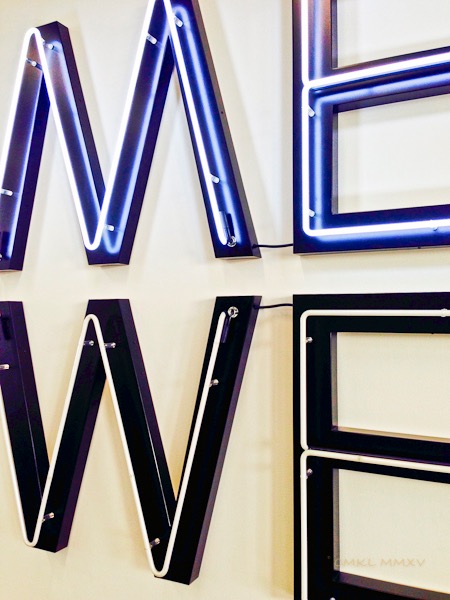 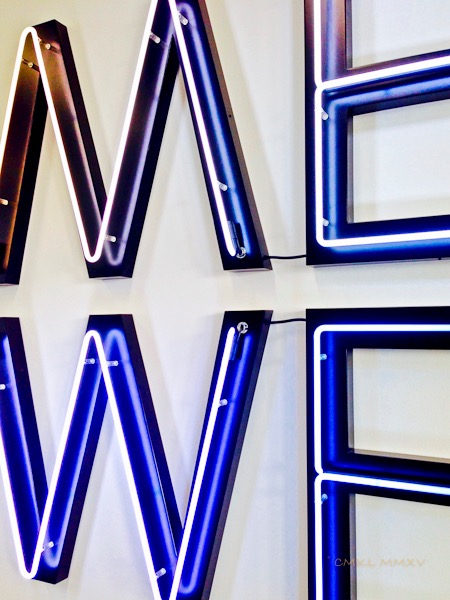 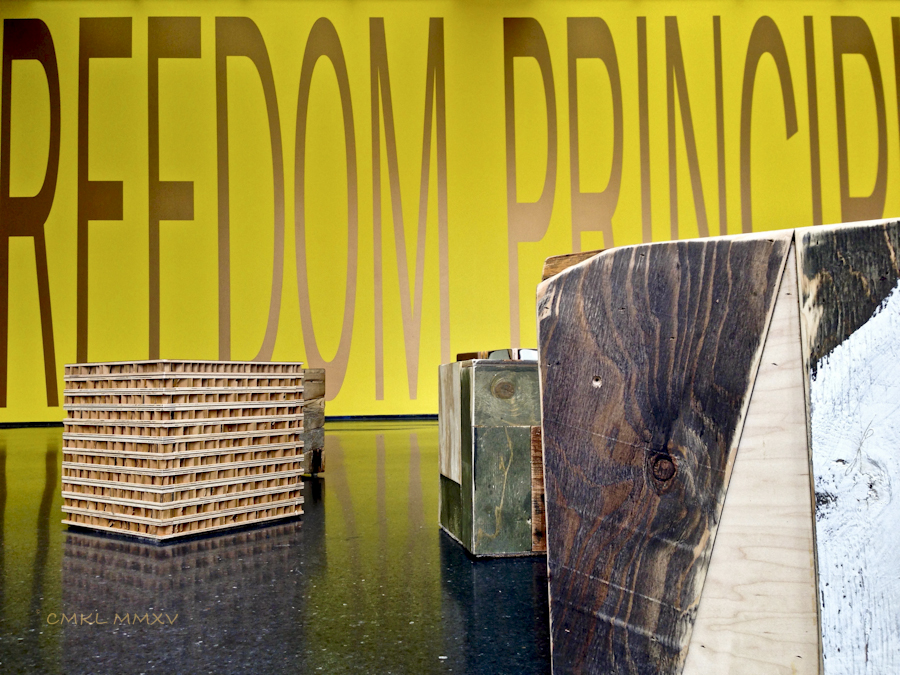 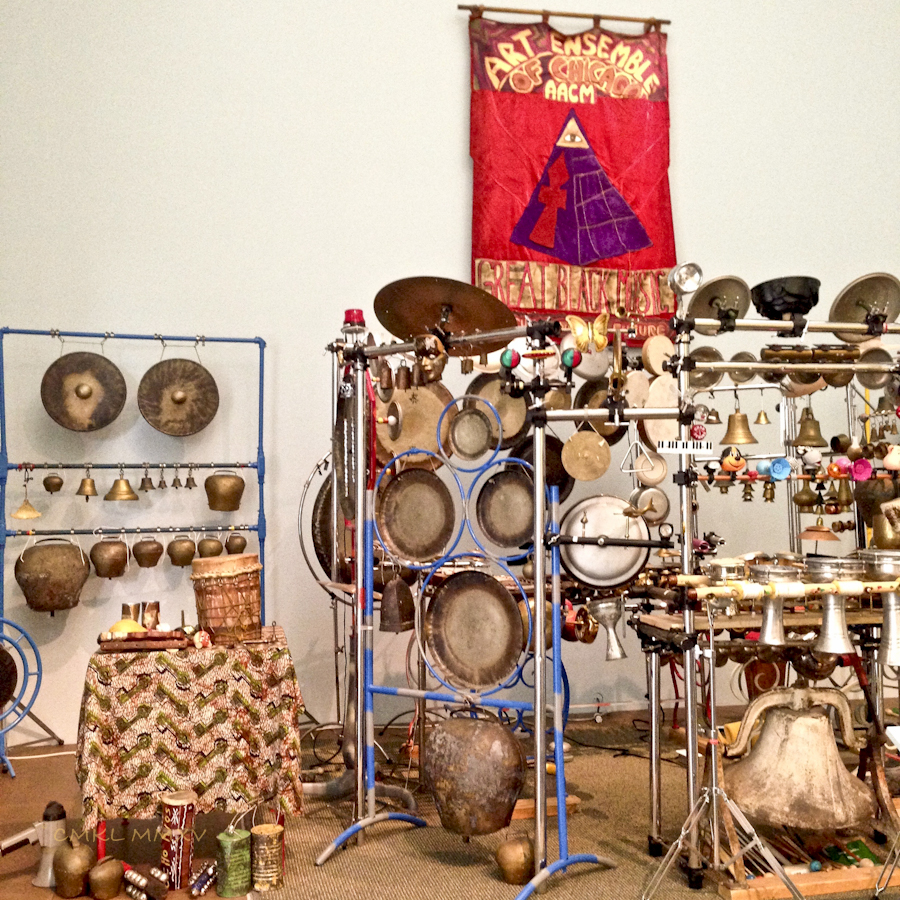 Since my own words would be woefully inadequate to explain the importance of the Association for the Advancement of Creative Musicians, the AACM, for Chicago’s cultural life, the AACM members’ involvement with and for the Civil Rights Movement, the evolution of jazz and the relationship of jazz musicians to other   forms of musical expression, I will have to make use of some of the museum’s helpful boards. 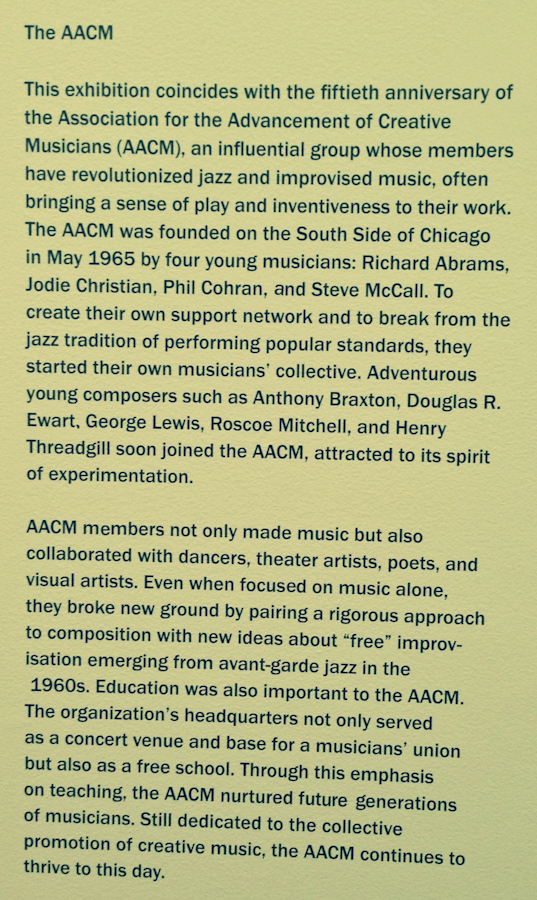 Leaving Hana behind we turned toward the most overwhelming installation within The Freedom Principle, Nick Cave’s “Speak Louder“. Mom fell in love with it right then and there. 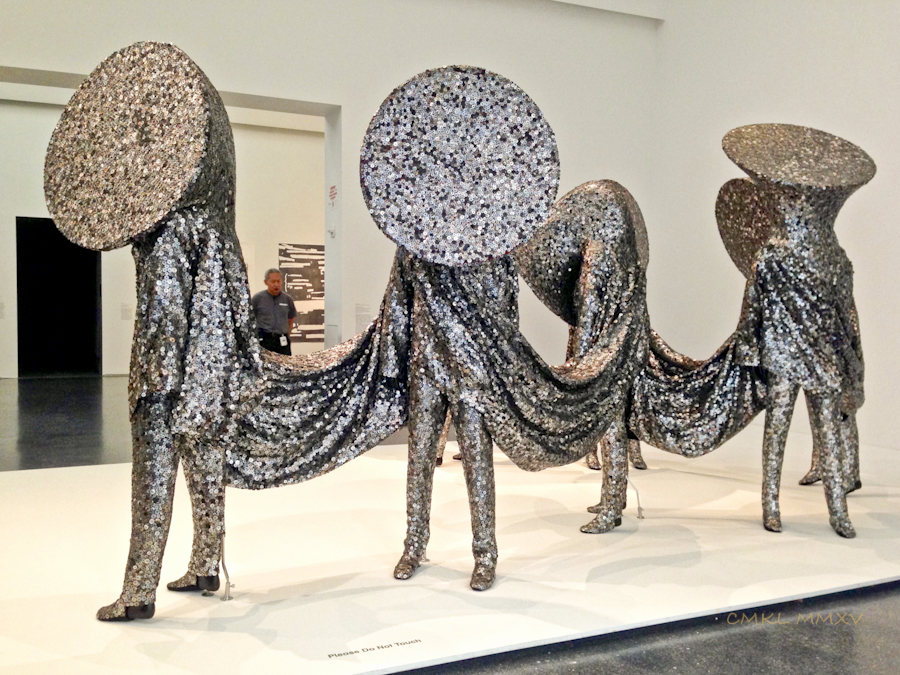 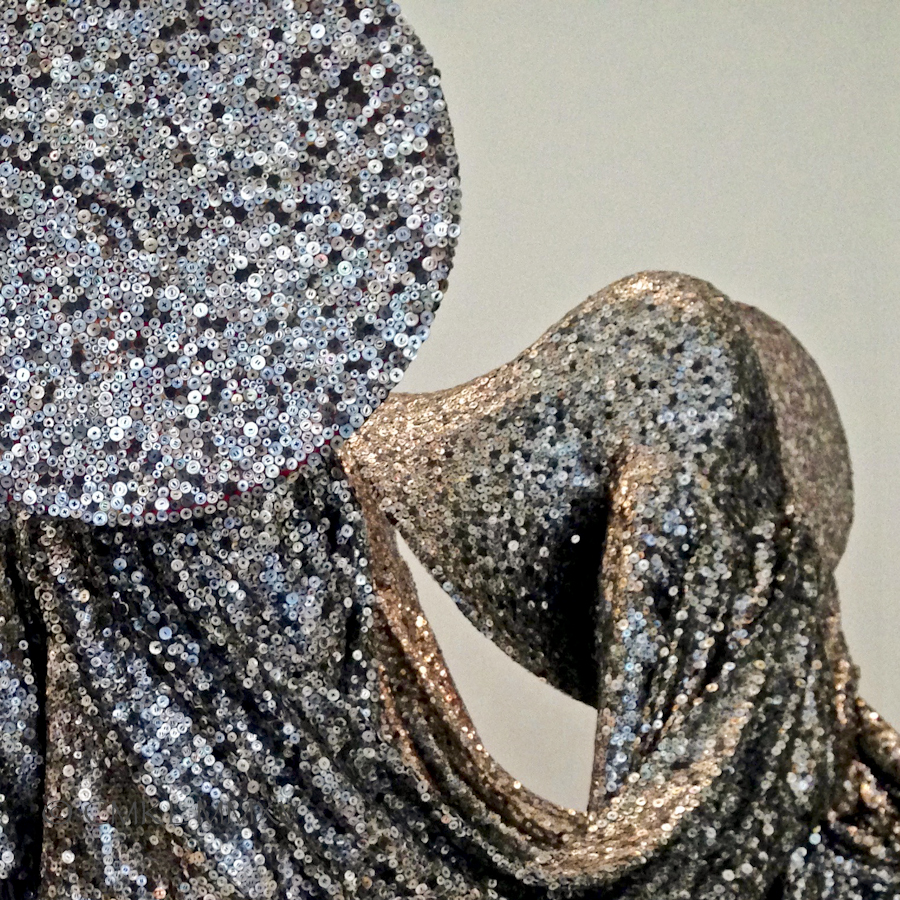 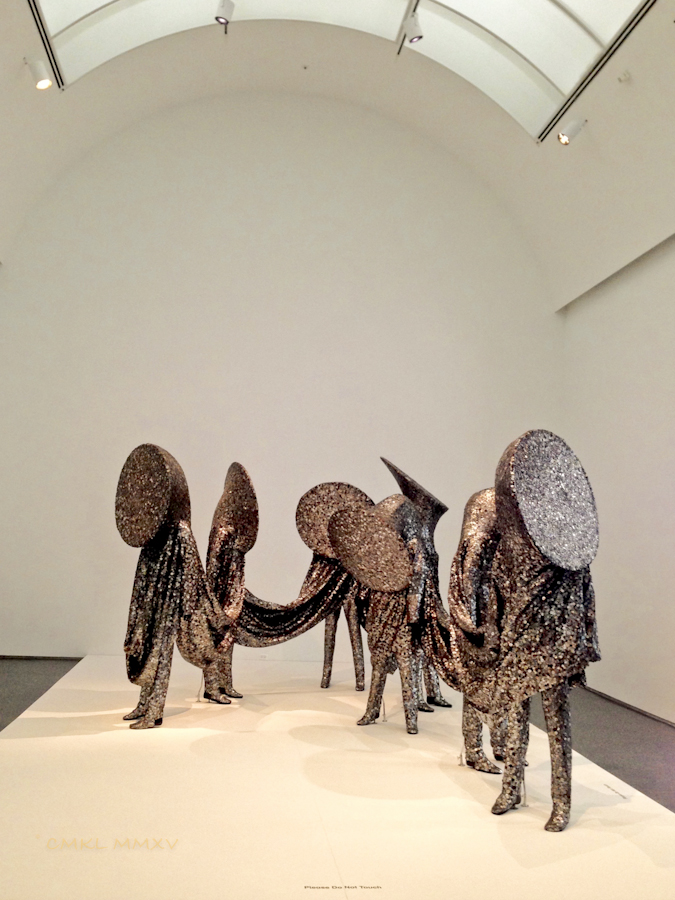 Among a number of exhibits, this gallery also presented another one of mom’s favorites, the gigantic shoelace panel of “We The People” 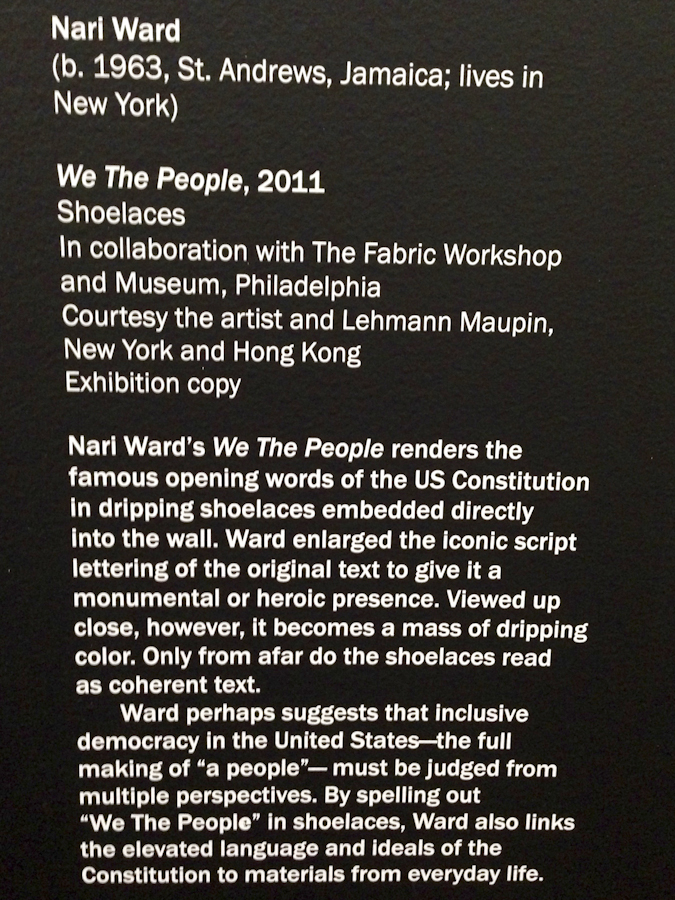 And then we have one of my favorite exhibits The Cymbals 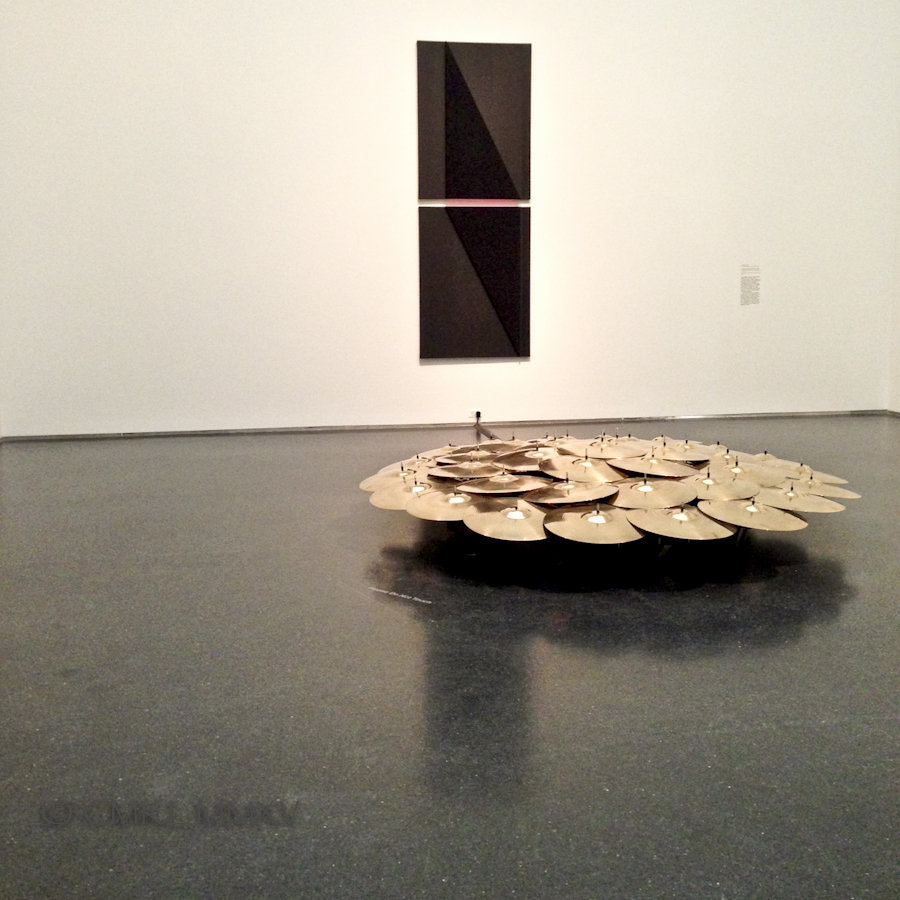 Associated with the Atkins Cymbals is Bigger’s “Ghetto Bird Tunic”. 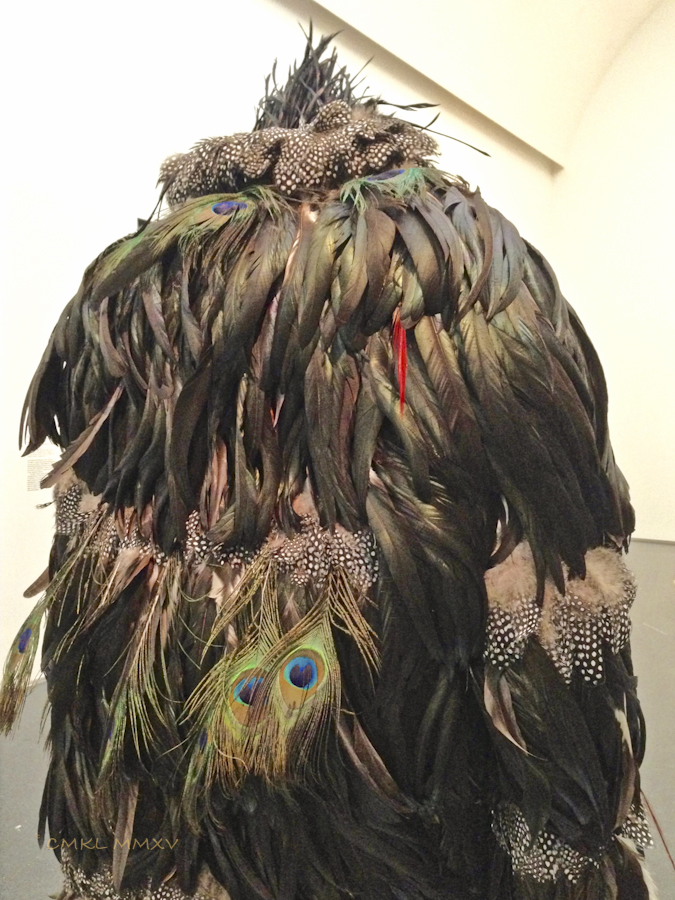 and then there is this incredible statement of black-out intelligence!

All works of art or statements or observations neither mentioned nor shown have not been deliberately omitted. One can’t represent a whole museum’s wealth of exhibits in one little blog post. I can only encourage anyone in proximity to a museum, a gallery, a library or a public park or assorted facility to make use of it, to observe, learn, absorb and inhale its richness. Thank you!

2 thoughts on “MCA with MOM”