The groundskeepers of the City of Saintes have been working hard to create this year’s Christmas Market, le Marché de Noël, in Place Bassompierre. This is our second winter in Saintes and I enjoy noting the differences in seasonal city apparel.

After raising three tall trees and placing the ‘chalets’ or vendor’s booths in a tight circle around two of them, the workers proceeded to decorate the trees with strings of white, blinking lights, turning the newly raised evergreens into sapins de noël, Christmas trees. Next the city crew brought in veritable mountains of dirt.

The dirt was shaped into a hilly landscape around our Gallo-Roman arch and also near the chalet assembly. Nothing was left to chance, as the plastic ground sheets were carefully marked to indicate the intended design.

Following a week of pretty crummy weather, today’s bright sunshine lured me across our newly opened pedestrian bridge for a closer look of the ongoing Christmas landscaping on rive droite. 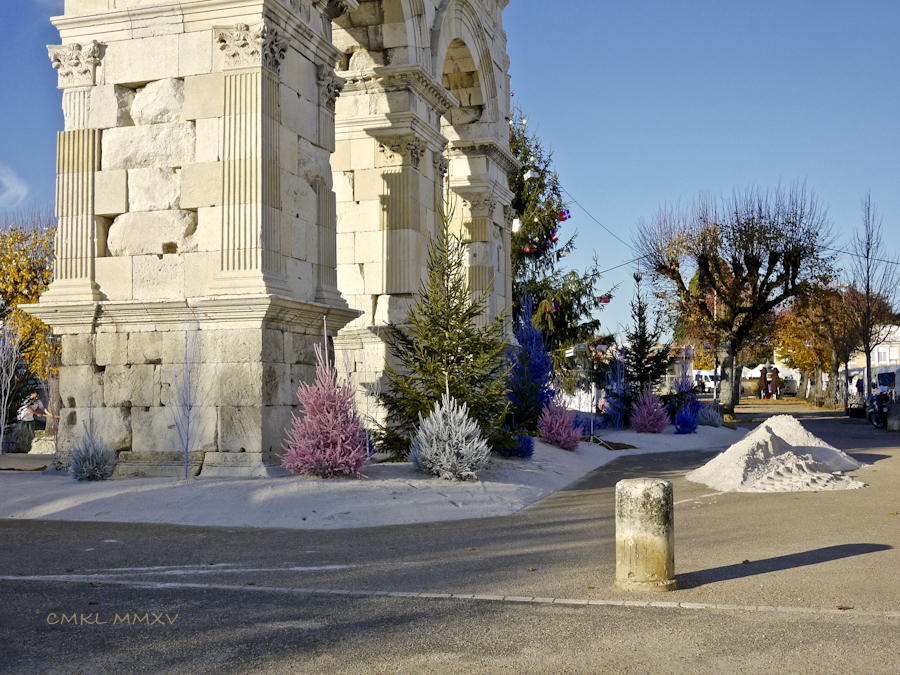 Approaching the arch, I saw that white sand, mimicking snow, had been used to cover the dirt-scape around the archaic monument. This year’s color scheme is quite kitschy, a deep baby blue, pink and white, using natural pines and flocked ones grouped together. Even though this design, combining Imperial Roman grandeur with Disney, is pushing the envelope quite a bit, the finished arrangement is sweet and pleasing to the eye. 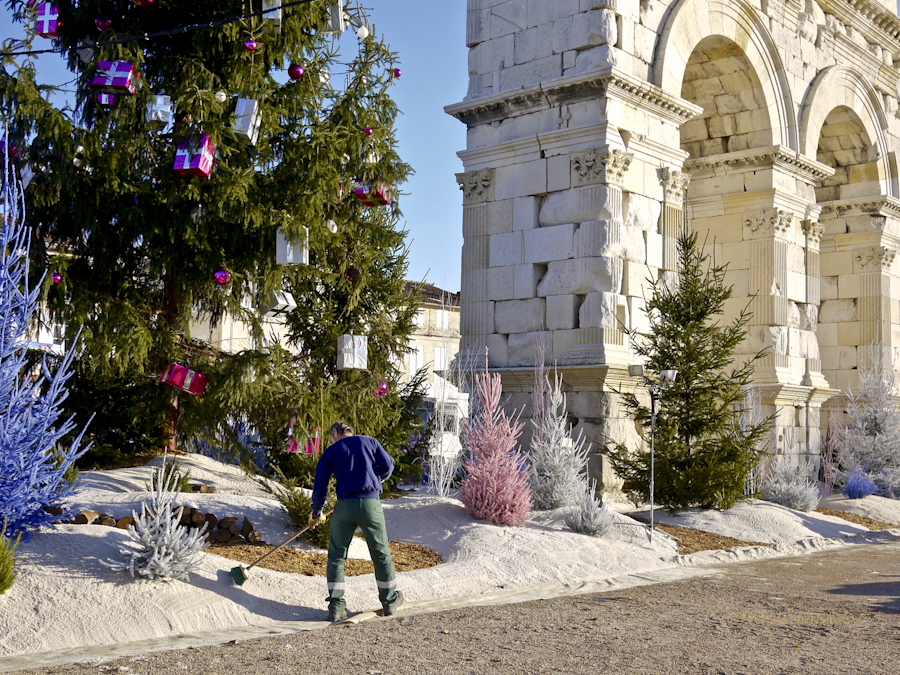 Most of all, though, I want to commend the groundskeepers of the City of Saintes for their splendid work attitude. They put so much effort in creating these seasonal tableaux, it’s definitely praiseworthy. For two years running I’ve watched these guys put their all into creating a temporary magical spot for all of us to enjoy. They do it with gusto and dedication and pride in their work. Bravo!

As I meandered across Place Bassompierre admiring the crew’s work, I also caught up with the understated seasonal decoration of Bernard-Palissy bridge.

On my way back to the Arch of Germanicus, I noticed the as yet unfinished landscaping around the chalets, allowing for some distinctive shadows playing across ground and structures. 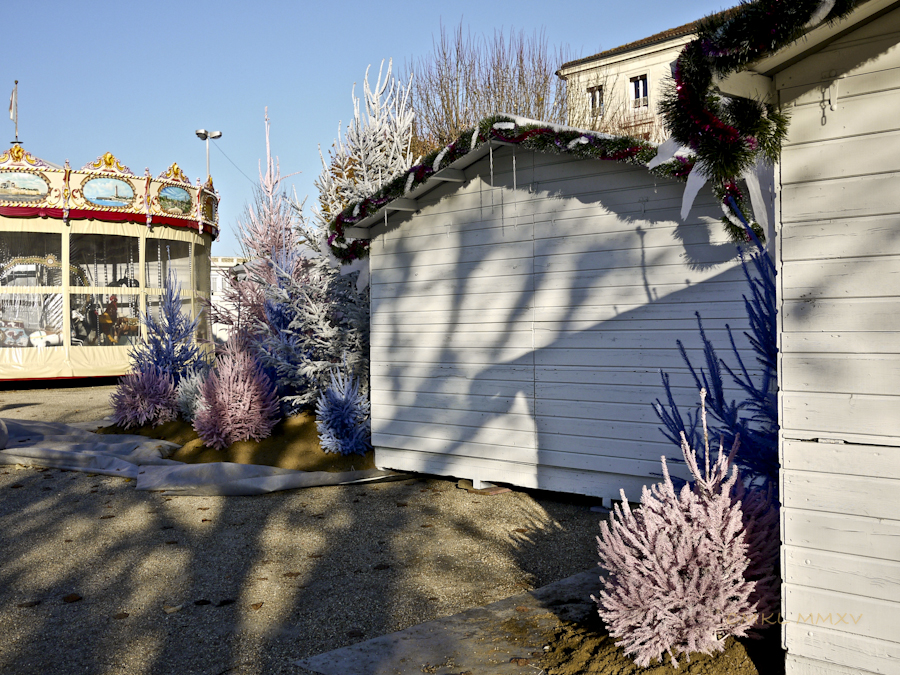 The crew in front of the arch was nicely preoccupied, 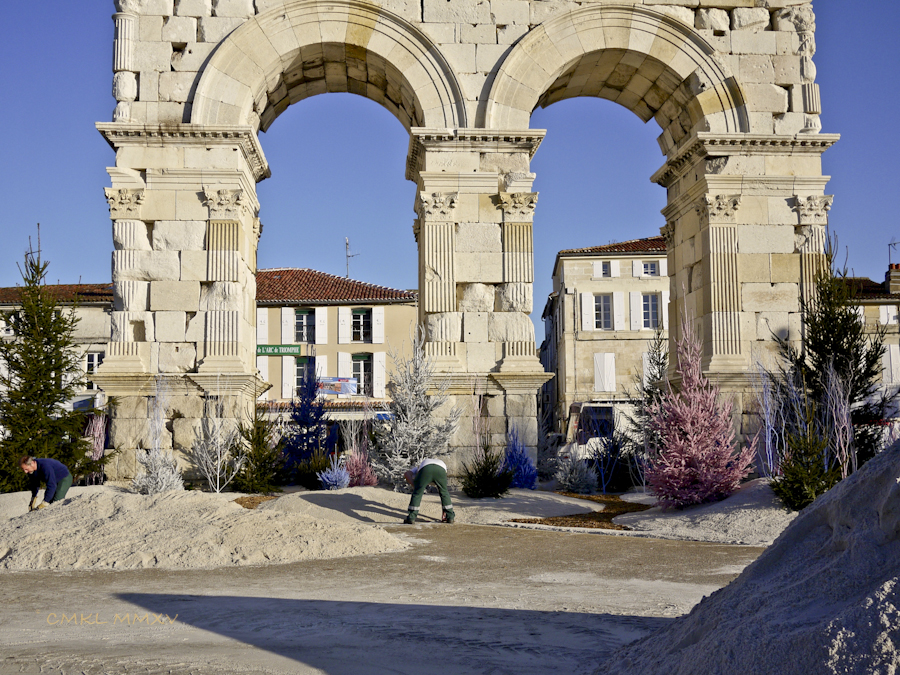 so they didn’t notice me secretly sneaking into their magic forest along one of the mulched pathways for elves.

Two thousand years of history quietly guarding the pastel arrangement – only in Saintes!

And as dusk settles over the Charente river, I wish you sweet dreams of Sugar Plum Fairy, Harlequin & Columbine.