We just returned from a remarkable weekend visit with friends in the village of Caunes-Minervois, département Aude, in the newly created région Languedoc-Roussillon-Midi-Pyrénées. On January 1, 2016, the formerly 22 regions of Metropolitan France started operating as 13 new mega-regions, a federal government measure to decrease administrative cost nationwide.

The weekend was truly remarkable in the respect that we met and connected with a number of enchanting and fascinating human beings, who we hope will remain part of our lives. At the other end of the spectrum of our delightful visit in the Minervois was the remarkably abysmal weather situation, as it was chilly, windy, wet, and miserable. In fact, we chose to visit during the coldest and most unpleasant weekend of the entire winter season 2015/16 to date. That being the case, we had many more cozy fireplace chats than hikes through the [elegedly] gorgeous countryside. 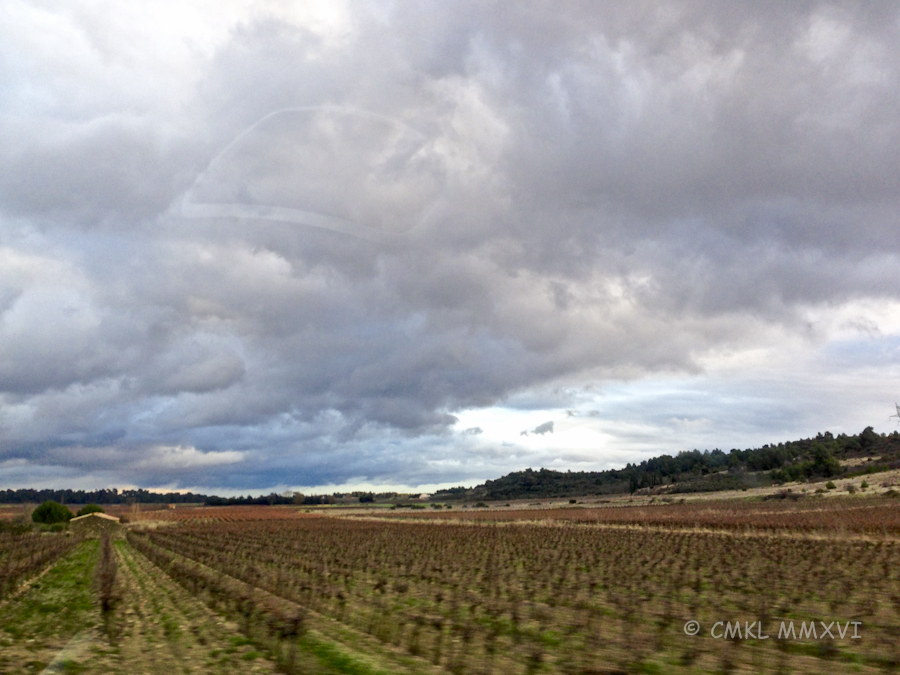 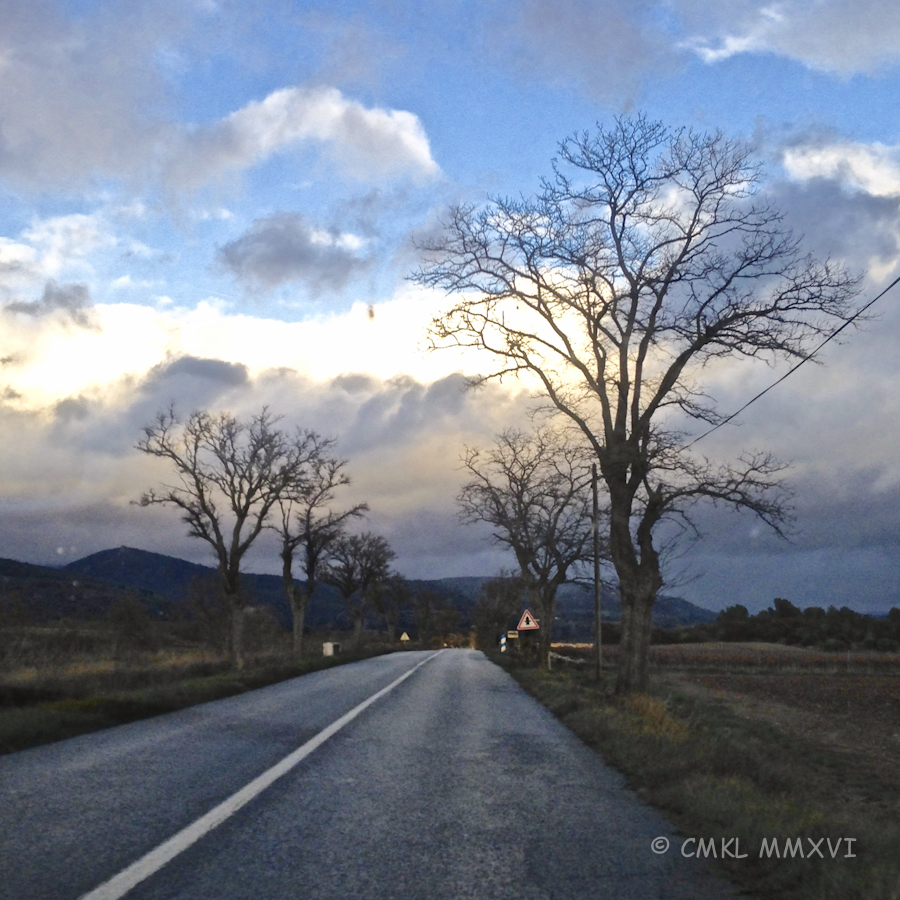 Picture taking was pretty much restricted to snaps from the protective enclosure of a car.

View from courtyard terrace: throughout visit.

We tried to be a smidgen more adventures, actually leaving our car cocoon when visiting the Château Massamier La Mignarde for a wine tasting in their refreshingly near-freezing tasting barn. One could see one’s breath forming these cute little clouds when exhaling … just kidding.

The Domaine Massamier has been around a while. It was first documented as a farming and wine growing hamlet founded by a Roman ex-legionnaire named Maximus in 836. And I didn’t accidentally drop a digit in front of that number! As you indubitably know, Roman legionnaires were paid notoriously low wages, if any, instead they were mollified with promises of landownership in or near Rom, the naval of the universe. But Rom eventually became too crowded and riot-prone, so the soldiers were enticed to settle in the provinces by giving them larger plots and slaves to work the land. They often married local women and facilitated the Romanization of said provinces, thus keeping opposition and strife at a lower level. [For my fellow Asterix fans: Ils ne furent jamais fou, ces Romans !]

A few years later, in 2005, one of the wines, the Domus Maximus 2000 was selected Best Wine of the World. The owner’s daughter Charlotte, who guided our tasting session, told us the story behind this championship. One of the distributors of Massamier wine took it upon himself to enter the Domus Maximus in the tasting challenge in London. When it became apparent that the wine might be the winning entry, he called and asked M. Vènes, the château owner and the viticulturist responsible for the creation of the vintage, to come to England immediately. Several calls were needed because papá refused to leave his work for a silly trip. He had no idea what was about to happen in London! As the poster above shows, he eventually relented.

While Charlotte prepared the bottles for our tasting, we roamed the huge barn with its barrels and assorted artifacts. 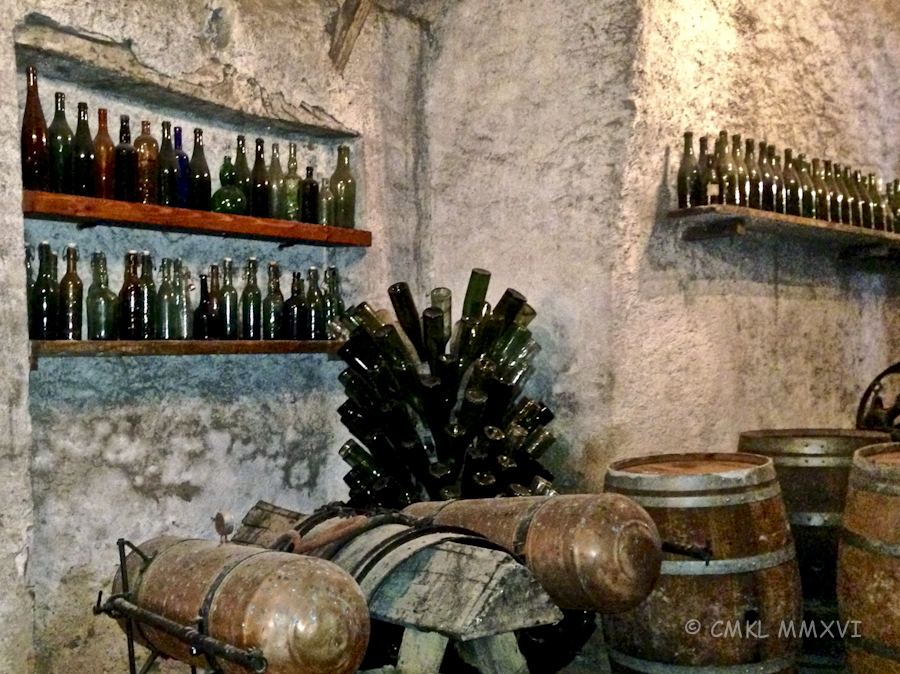 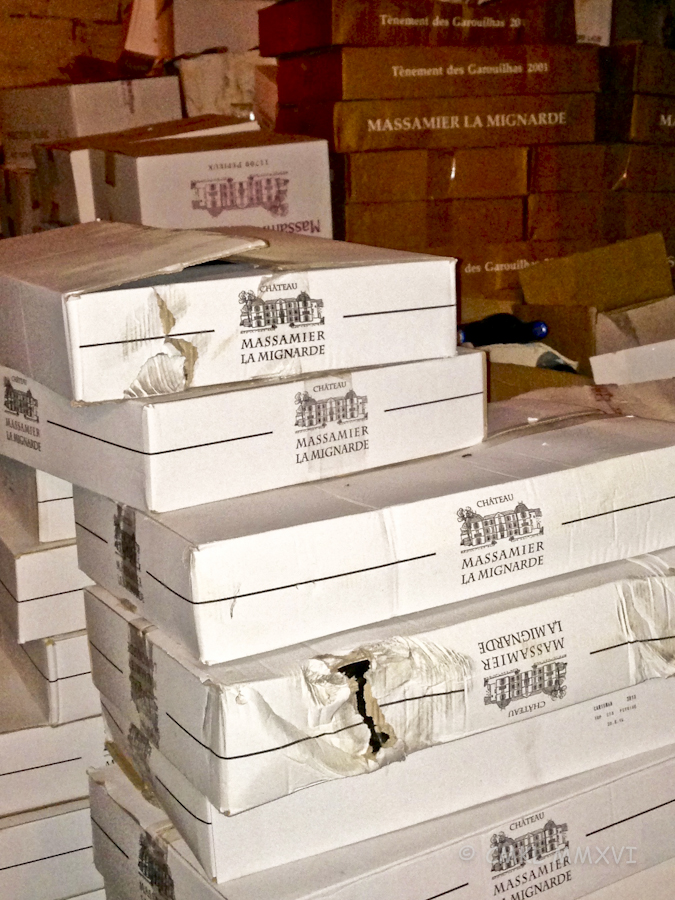 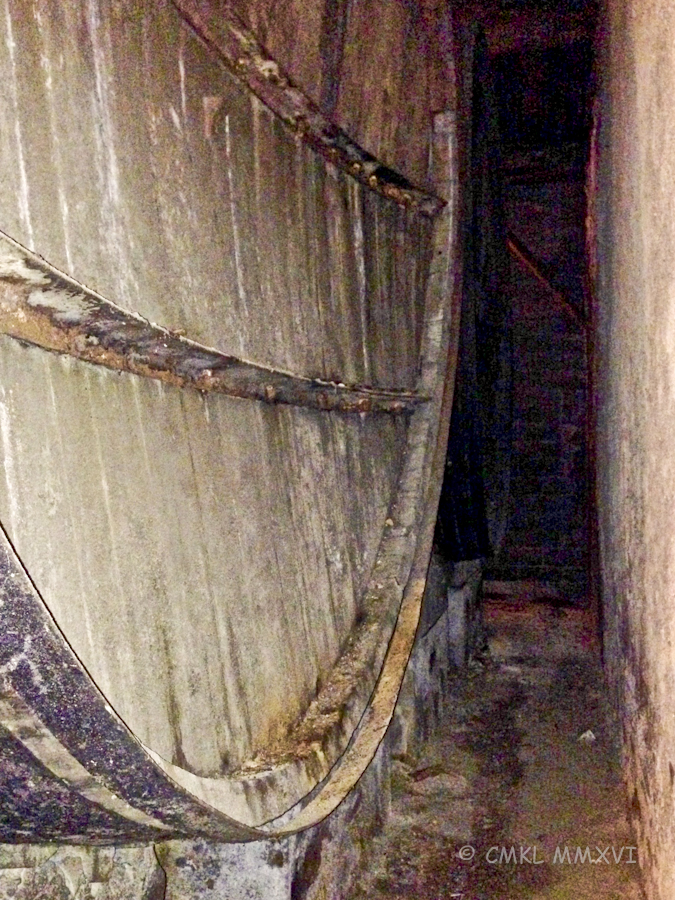 We tasted six wines and happily selected a few bottles to take home with us. 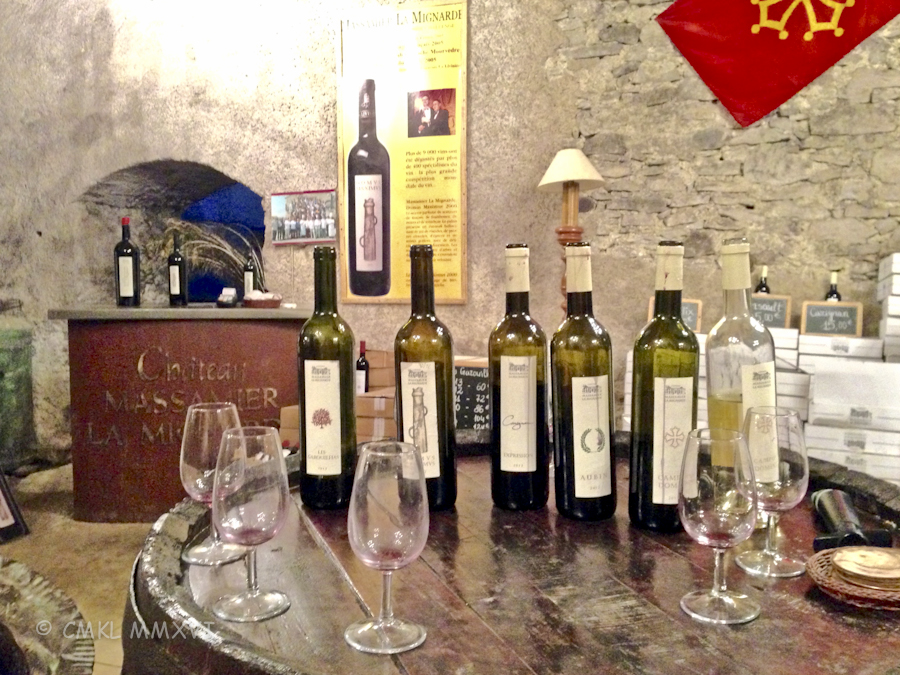 We did brave the cold a few more times afterward for hasty excursions to local landmarks like a charming chapel & a Celtic dolmen, and a quarry of red marble, also in operation since Roman times. 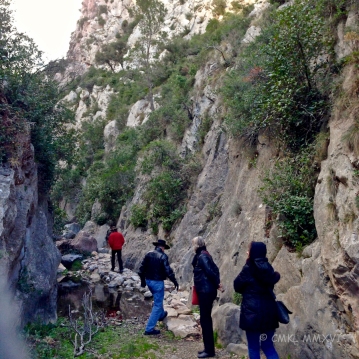 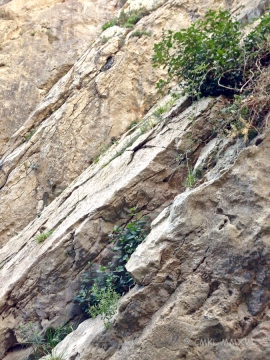 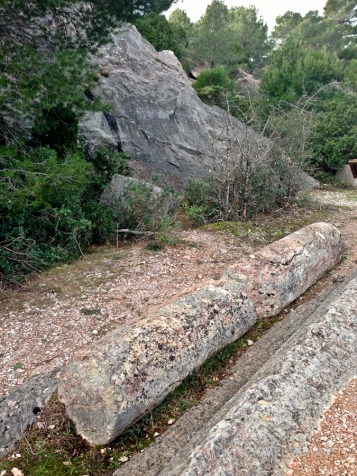 Our Saturday morning was dedicated to the aromatic fungus called a truffle at the Marché aux Truffes, which is held once a month from December through February in Villeneuve-Minervois. The truffle brethren of L’Association des Trufficulteurs Audois [ATA] or in Occitan “La Confrérie los Trufaïres de Vilanova” organize the sale of the black truffles of the Aude area and associated events.

We were very lucky in so far as the Brethren of the Truffle also felt the pain of the harsh winter winds and moved the marché indoors. As you entered the venue, you immediately noticed the “truffle intake station”.

A truffle hunter (foreground) offers his basket with fungi to the inspectors of the ATA behind the table. They scrutinize the truffles for overall quality, texture, freshness and aroma by, you guessed it, the old-familiar scratch & sniff method. The weight of the approved truffles is recorded before they’re transferred into a burlap sack, which is tied, sealed and returned to the happy owner.

Whilst the truffles were inspected for the upcoming sale surprisingly called an auction, we fortified ourselves with a slurpy oyster breakfast, washed down with a small beaker of chilled white wine. The bar is run by the brethren as well and offers a variety of truffle butter tidbits in addition to the oysters. I was taken quite unawares by the strong saltiness of these Mediterranean bivalves as opposed to our local Île d’Oléron varieties. 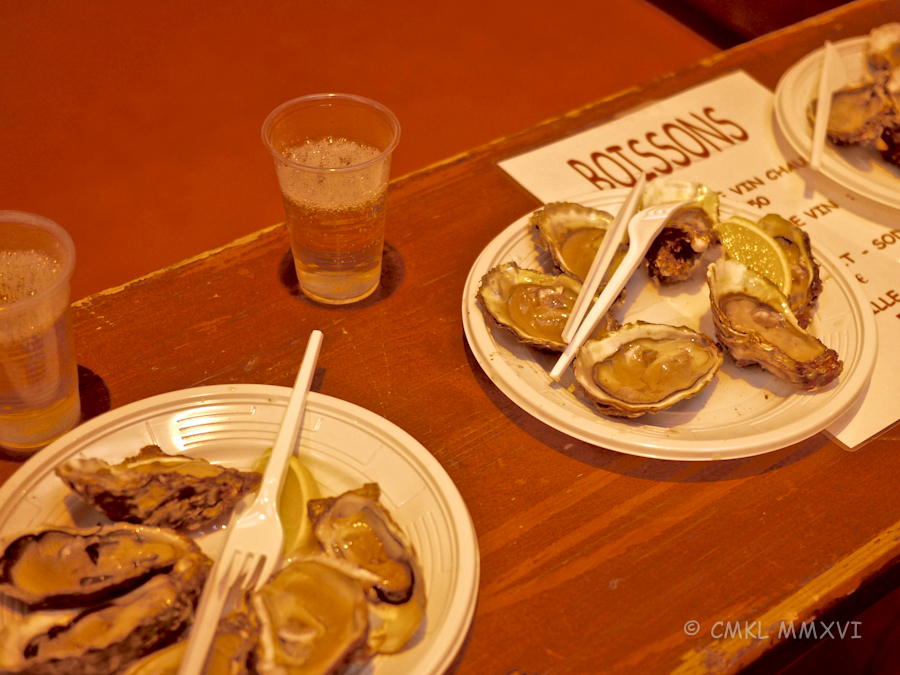 After our snack, we toured the stalls of vendors crowding the center of the hall. Most were offering local farm products and crafts, like this basket maker. 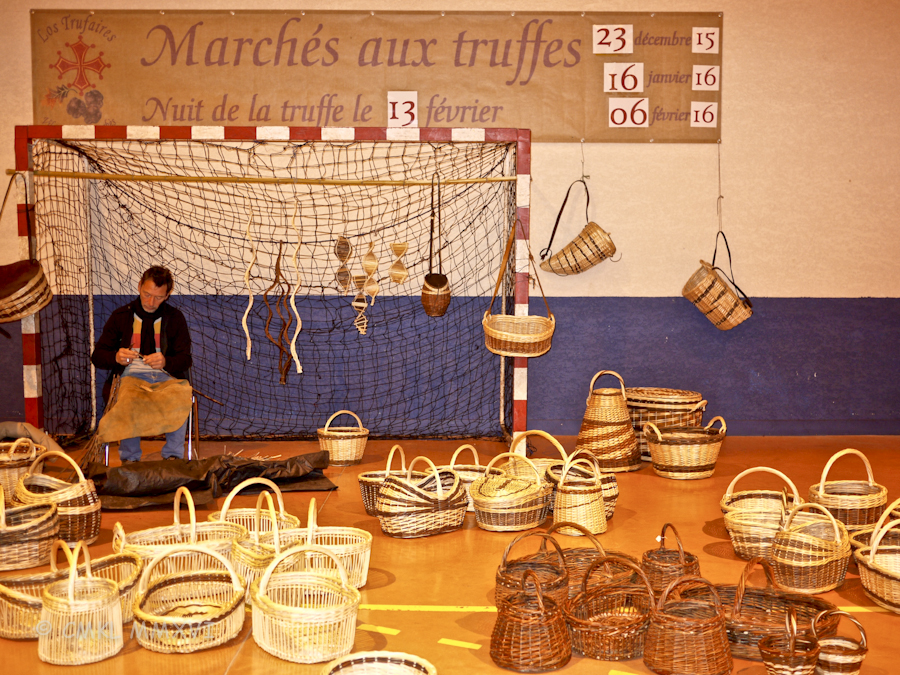 Other offers included wool from black sheep only and yummy goat cheeses. 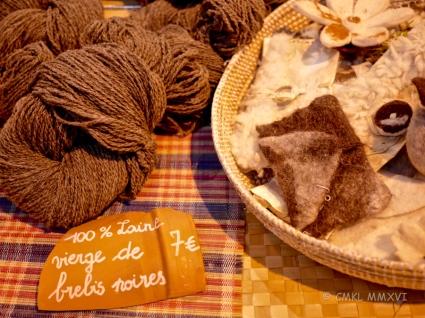 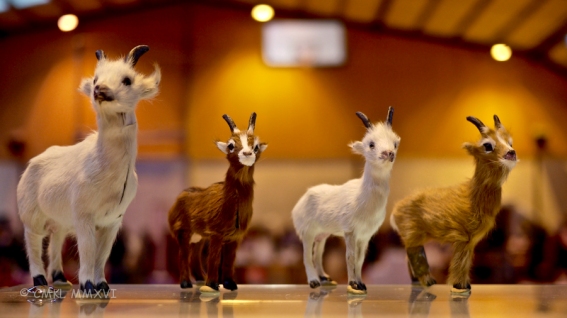 Oddly enough, there was also a selection of beers from Cuba, Mexico, and Columbia on offer. What a strange sight. One wonders, off which truck they might have fallen …

The most fascinating vendor for me, though, was the Òrta Rouffia saffron dealer. In conversation with our friends later, I confidently and erroneously placed this producer in the Provence region, whereas it’s actually a local saffron farmer from the Corbière, the southern portion of the Aude department. The Corbière mountains form the foothills of the Pyrenees.

I had never before seen the real thing and it was exciting to smell freshly processed saffron threats. The spice is composed of dried styles & stigmas of the sterile cultivar Crocus sativus. It’s a very expensive spice because propagation, harvest, and processing are entirely done by hand. The saffron one buys in the supermarket is usually so old, it’s dried up and flavorless. The charmingly toothless saffron farmer discussed a variety of saffron issues with me, including the pros and cons of processing red peppers with saffron as a condiment for fois gras, for example. To reinforce his point, he offered me a taste of his confit de poivron rouge au safran. When I dipped my toothpick in the small jar of confit, very little adhered to it. No, no, he admonished me, take a real taste, dip again! So I scooped up a nice junk of red pepper thickly covered in its* juice. Let me tell you, candy in heaven couldn’t be any better. Naturally, I had to buy a jar to take home!

[*In France, a description of a dish usually refers to the main ingredient and “its” side, or type of preparation. ‘Cod in his herb sauce’ rather than just any herb sauce. I quite like this loving closeness of ingredients.]

The Òrta Rouffia stand was right across the aisle from the main event set-up, a very long table separated by a rope from the public area. And just as I stored my little poivron jar in my bag, the activity level behind the rope markedly increased. All the truffle hunters whose truffles had been approved by the inspectors began weighing and labeling their individual fungi for sale. An ever increasing crowd of potential buyers amassed in front of the rope anticipating the starting signal for the Truffle Auction. And here is was, the musket shot that traditionally opens the event.

Simultaneously the rope is lowered and the stampede commences. 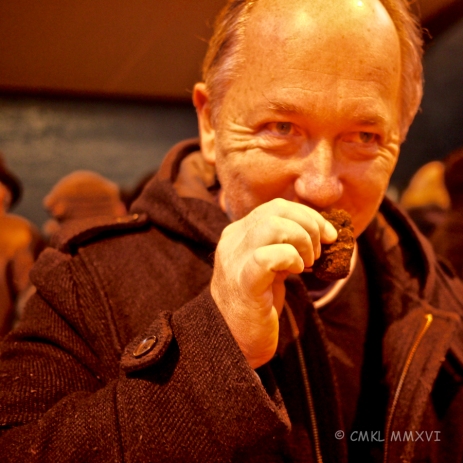 Anonymous member of the public. He gave me permission to capture his truffle delight.

Our hosts bought a truffle,

some of which we enjoyed that very evening flavoring a Salade Lyonnaise, consisting of bitter frisée with crisp bacon bits in their balsamic reduction and its poached egg. It was ever so delicious and satisfying!

Our time in the Minervois was a wonderful adventure with new experiences and we’re looking forward to another visit in Caunes-Minervois to further explore this beautiful village and its surroundings.

On our drive home, we were lucky to catch a glimpse of the Pyrenees mountains. I wish we could’ve gotten a little closer to their snow-capped peaks.

And a few hours later we were back home under the benign protection of our Arc de Germanicus!

2 thoughts on “Of Truffles”