What a change! From Trafalgar Square to the Hoe. Who’s ever heard of The Hoe? According to Wikipedia, a hoe is either an agricultural implement, a Korean fish dish or a whore. In the city of Plymouth, the Hoe is a park on the limestone cliffs next to the Royal Citadel. The sloping ridge of the cliff in the shape of an inverted foot and heel, a “hoe” in ancient Anglo-Saxon, looks out across the English Channel toward France and, a little closer to home, toward Cornwall. Legend has it that it was here, on Plymouth Hoe that 18-foot-tall Corineus or Coryn, founder of Cornwall, wrestled with Gogmagog the last of the evil giants of the Land of Albion and killed him by throwing him into the sea, now known as Plymouth Sound.

As you walk up to Hoe Park, the bright and majestic façade of the former Grand Hotel which has since been converted to apartments greets the visitor. 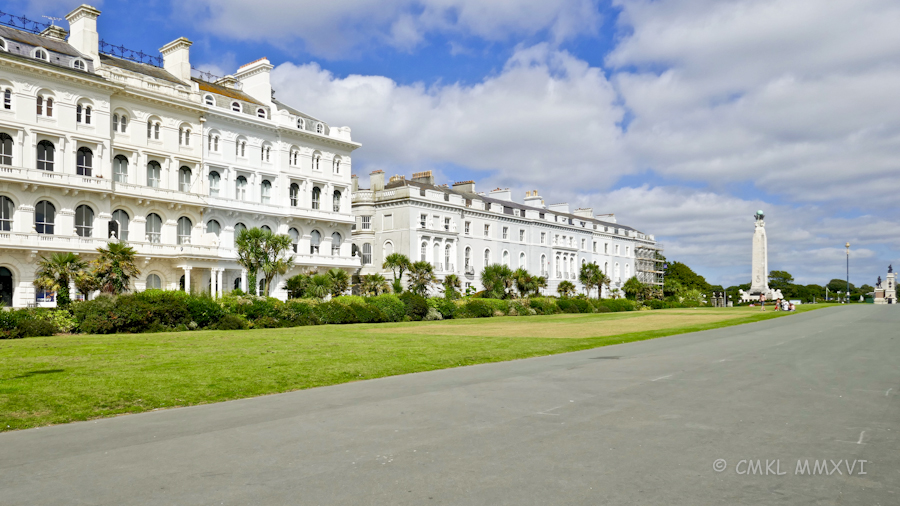 As does Smeaton’s Tower lighthouse.

The sloping turf of The Hoe Park, looking SW 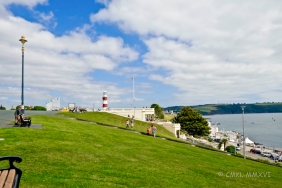 I small section of the lovely Tinside Lido, a famous 1935 Art Deco saltwater pool with fountains and sundecks. 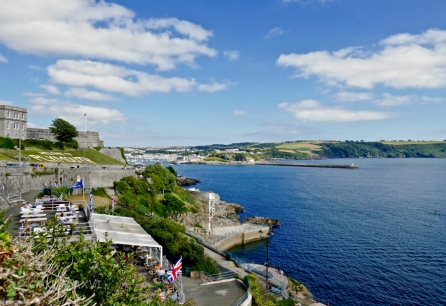 We enjoyed a refreshing cider under that white awning.

A copy of the statue by Boehm in Drake’s birthplace Tavistock, Devon. It isn’t regarded to be a good likeness of Sir Francis Drake.

“HE BLEW WITH HIS WINDS AND THEY WERE SCATTERED”

Sir Francis Drake is reputed to have played bowls, the English lawn bowling game, on Plymouth Hoe while awaiting high tide to meet the Spanish Armada. After the fortuitous outcome of a naval battle that never was, Queen Elizabeth I believed that her protestant God had granted her victory over the fleet of the Catholic Spanish king. She had a medal minted saying Flavit Jehovah et Dissipati Sunt, meaning God blew and they were scattered. Rey Filipe II on the other hand, after having recovered from choking on a piece of bread when hearing of his armada’s fate, told his troops that you can defeat men but you can’t be victorious over waves and winds.

Many other memorials and points of interest in Hoe Park and surrounding areas can be discovered by the diligent tourist. Most of the landmarks relate to warfare, especially naval action, which is not at all surprising in a region in which three maritime centers were merged into one community in 1915. These “Three Towns” are Devonport, East Stonehouse and Plymouth herself.

In the western Sound, along the banks of the Tamar river, you find the Royal Navy Dockyards of Devonport, one of Her Majesty’s largest naval installation, including nuclear submarines. 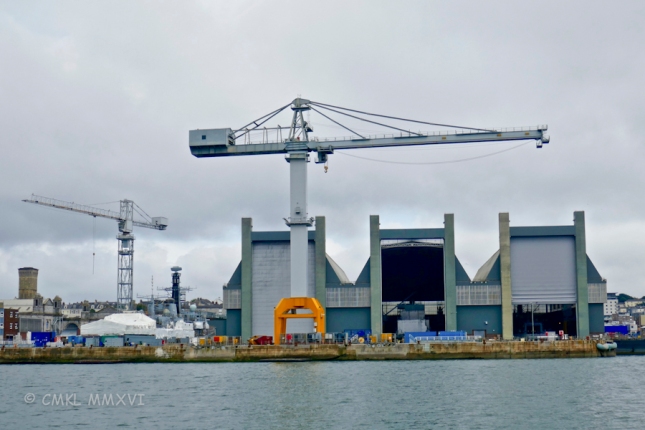 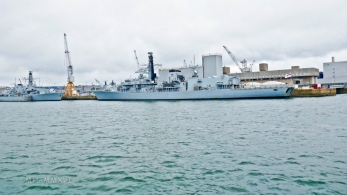 But all in all, I prefer the silent movement of a sailing vessel over the gunmetal gray of warships, so let’s get out of Devonport.

In Plymouth proper, deeply hidden within the easterly portion of Plymouth Sound is a locked deep-water harbor, Sutton Harbour, which we already saw during our visit to the Nao Victoria. It has served navy and merchant ships, among them the Mayflower, for hundreds of years.

Coming home, the “Petite Follie” fishing boat waits patiently in the lock for the water to rise to Sutton Harbour levels. 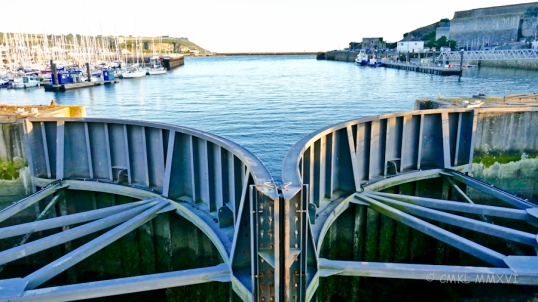 The lock gates are closed against the low tide in the Plymouth Sound breakwater.

A rather large sculpture called “The Leviathan” created by Brian Fell was installed at Sutton Harbour in 1996 amidst some controversy. It’s an ocean-related creature composed of a seabird’s foot, fishlike dorsal fin & head, and a lobster claw, among other features. Since it’s located in the Barbican neighborhood of Plymouth, it has acquired the local nickname “Prawn on the Barbie”. 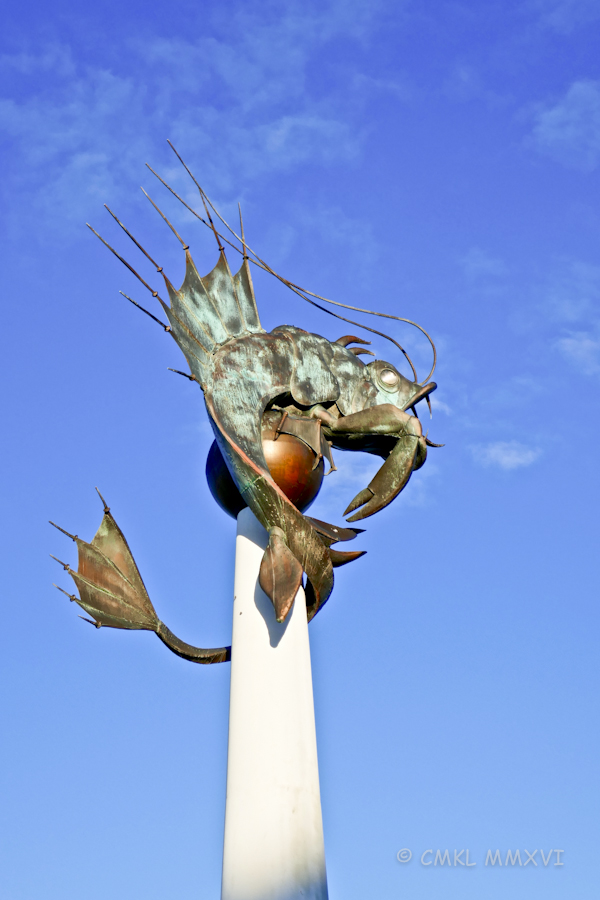 The Mayflower began its fateful journey to the colonies here in Sutton Harbour, then still called Sutton Pool, on September 6, 1620. The Mayflower Steps memorial is located next door to the Victorian pub The Admiral MacBride, where we enjoyed cider and crab sandwiches on our first visit to the Barbican. Considering the configuration of the harbor almost 400 years ago, The Admiral MacBride presently occupies the spot where the Mayflower might have been moored.

Between Devonport and Plymouth, you’ll find the town of East Stonehouse,

home of everything and anything maritime. West Stonehouse, by the way, used to be a town on the western riverbank in Cornwall. It no longer exists. 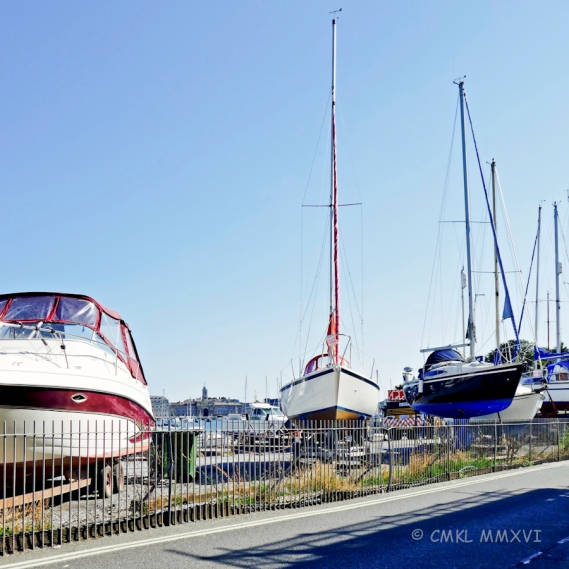 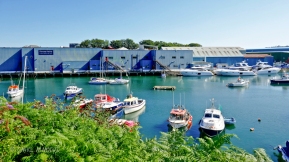 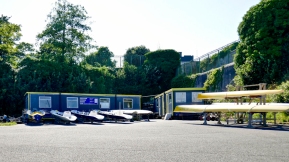 And after you’ve recovered your strength at Jolly Jacks Bar Bistro & Restaurant, 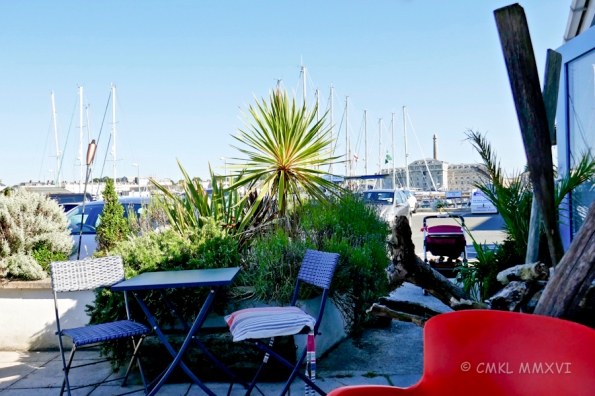 you can sneak illegally into the Mayflower Marina which offers nearly 400 berths to yachts up to 20 m LOA. 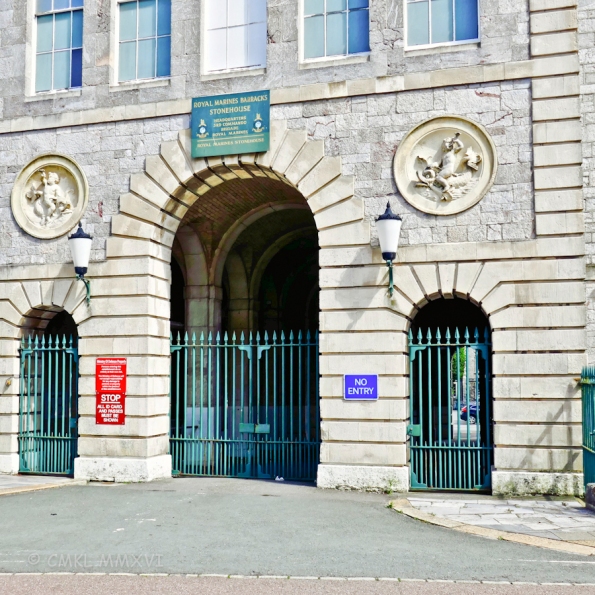 Pretty posh, for barracks and all!

Civilian housing is quite nice, too. 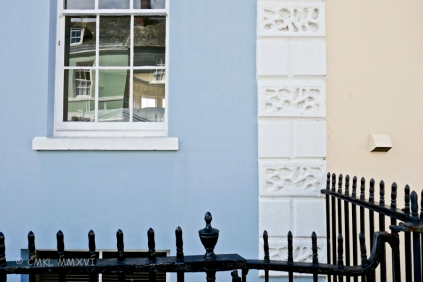 These houses back up to the seafront with beautiful bay windows, as you can see in the lower right window pane – the other panes reflect the houses on the opposite side of the road.

This is the view from Stonehouse across the bay to the Mayflower Marina. The Royal William Yard is to the left. 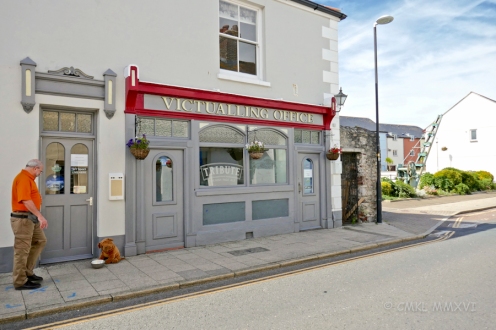 The victualling yard was built between 1826 – 1835 as an appurtenance to the Royal Navy Dockyard in Devonport just upriver along the Tamar river estuary. The yard consisted of a central storage house, flanked by a mill and bakery operation to one side and a brewery to the other. The yard also had a cooperage to make the needed storage barrels and a slaughterhouse. Thus it produced a sailor’s basic ration: biscuits, beer, and salted beef. There were also officer’s quarters and administration offices, everything constructed in matching limestone and granite. A harbor in front of the victualling complex allowed for the easy transport of provisions to the dockyards.

The Royal William Victualling Yard was sold to private interests in 1992 and has since been developed into a fancy tourist and entertainment venue. 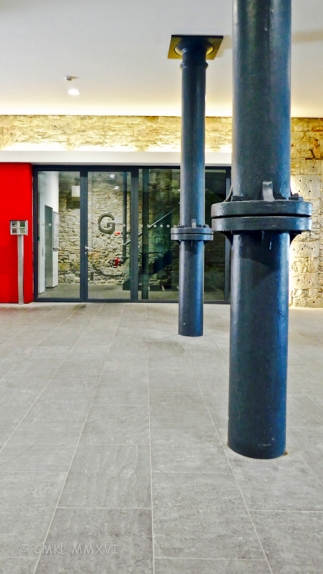 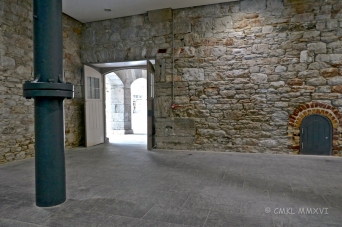 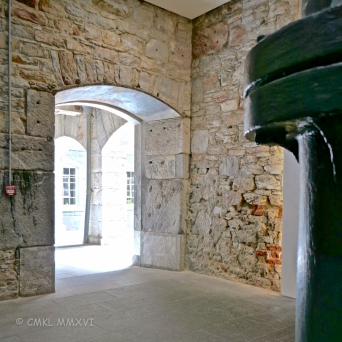 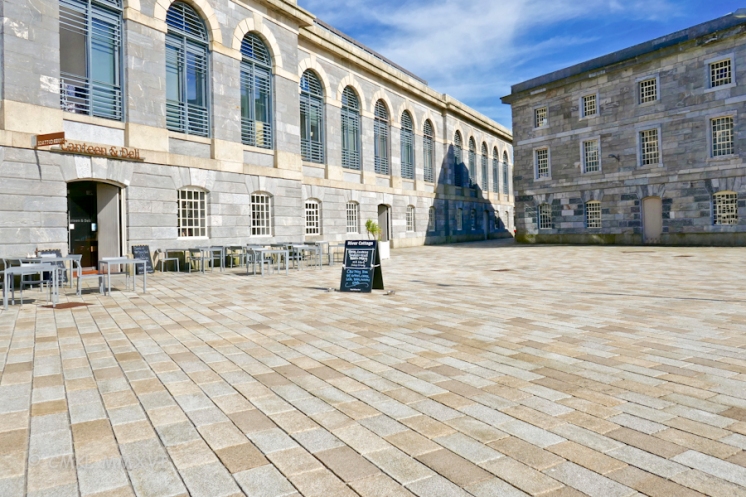 I’m faster than you!

Looking up toward the Tamar estuary. Cornwall on the left, Mayflower Marine straight across, the Royal Navy Dockyards in Devonport just out of view. 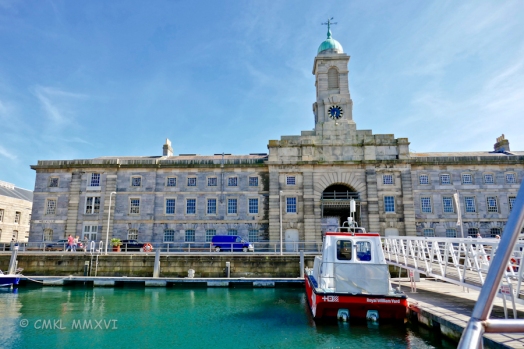 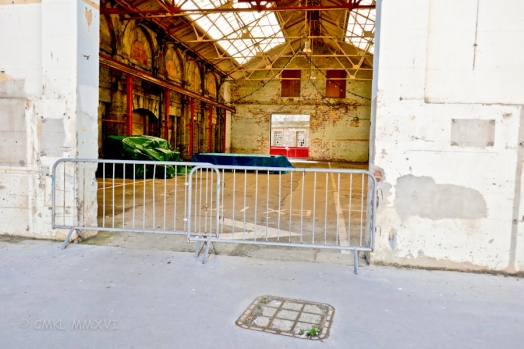 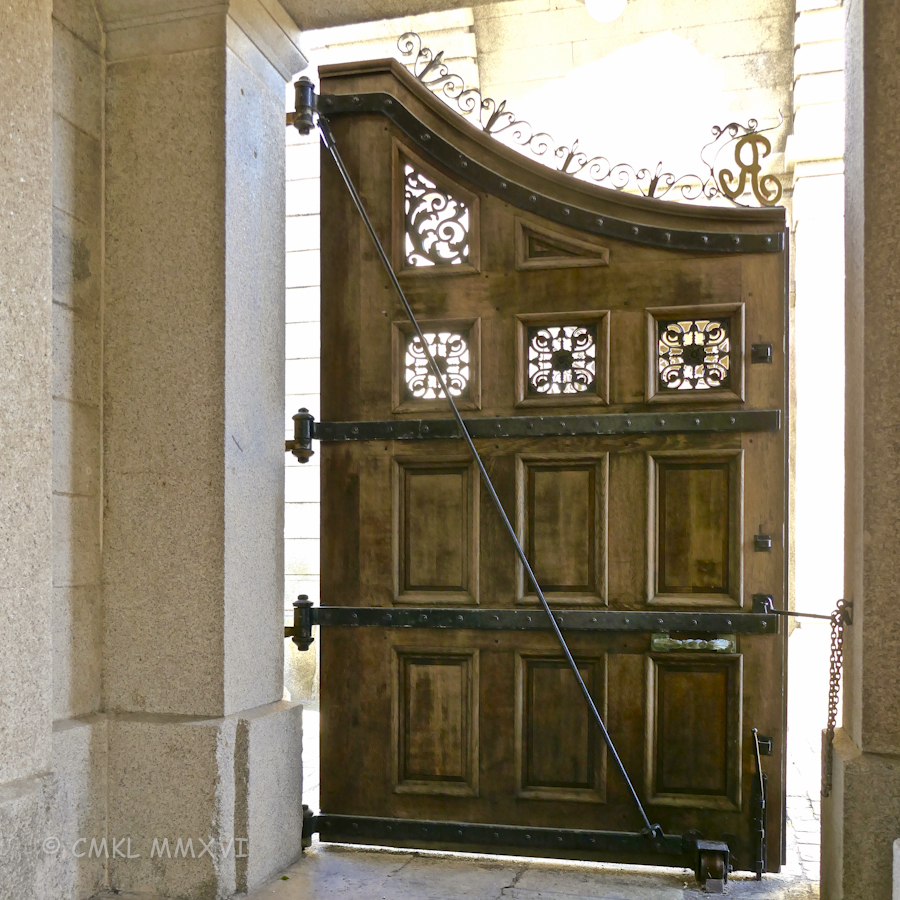 As you wind your way West to East along the coastline of Plymouth Sound, you’ll also encounter ferry docks and other commercial maritime enterprises in the Millbay area of Plymouth. Millbay extends between Stonehouse and the Hoe and this was our “home port” while in Plymouth. Our top-floor home exchange apartment overlooked the King Point Marina and the Plymouth Ferryport with its Brittany Ferries going back and forth between Plymouth and Roscoff, Brittany, France, a town surrounded by artichoke fields, where I did some fieldwork in a marine biology laboratory of the Sorbonne in a distant age. Even though this is a commercial neighborhood without cute cafés and overnight truck parking rather than boardwalk promenades, it was fascinating and mesmerizing to watch the maritime activities throughout the Sound, but in particular the ferries right below us. Not to mention the British Fireworks Championship! 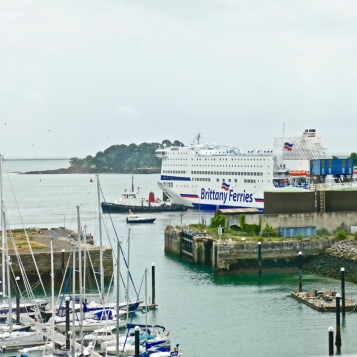 Under the watchful eye of the harbor pilot, “Faithful” gives the ferry one more push to her into her berth.

British Fireworks Championship over the Hoe

Lining up to take the ferry to France 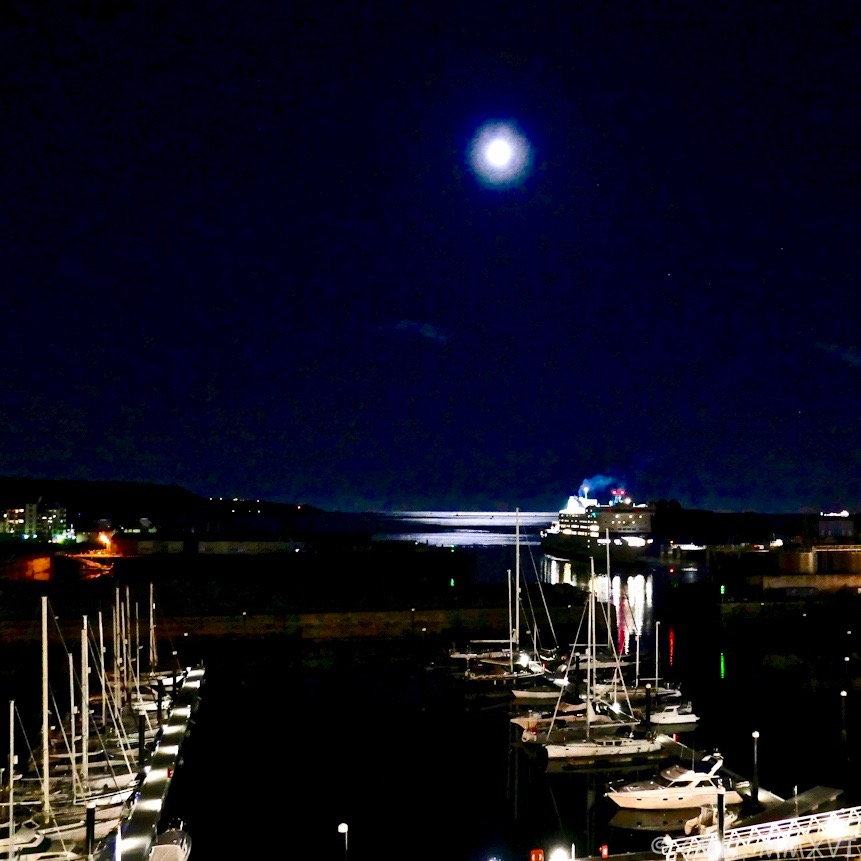 But back to The Hoe, where we’re currently walking toward Sutton Harbour and the Barbican, the only part of Plymouth that didn’t sustain irreparable damage through the 59 German bombing raids during the “Plymouth Blitz” in which 1 172 civilians were killed and a further 4 448 were injured. Alongside civic buildings and shopping centers, 3 754 homes were destroyed, as well as 41 churches and 26 schools. Children were separated from their parents and evacuated to rural areas away from the coast. The actual target of the air raids, Her Majesty’s Royal Navy dockyards, continued to operate throughout the war. Bastards couldn’t even shoot straight.

On March 21, 1941, French poet André Savignon, visiting in Plymouth, writes: In this town that was wasting away in reddish trails of smoke, only a few citizens wandered: the others were still in hiding; or lay, all distress ended, under the ruins.

On a more cheerful note, there is a large Runestone in Hoe Park, presented to the citizens of Plymouth by the Scandinavian countries, in commemoration of one thousand years of peace since the last Viking raid up the Tamar river. 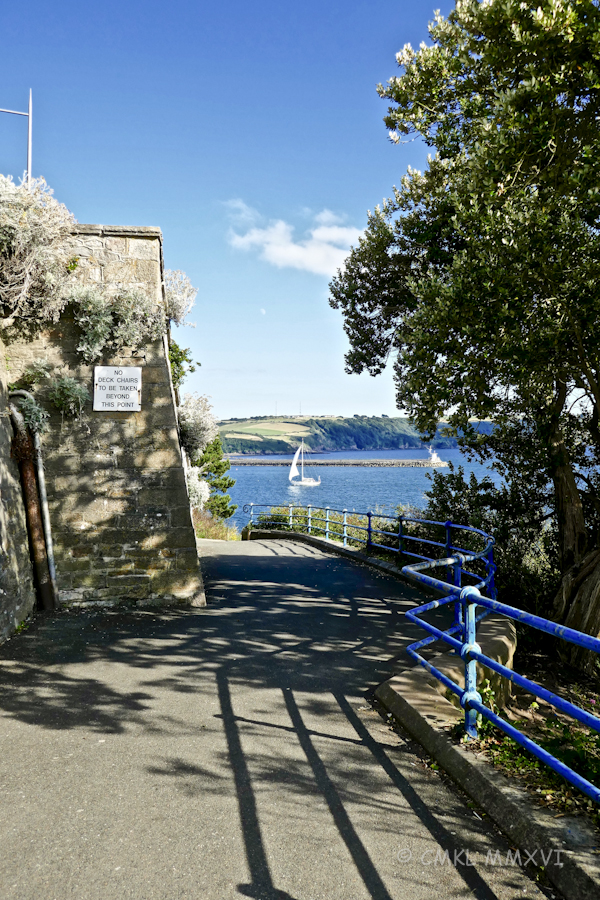 Walking beneath the Royal Citadel

Summer on the Channel coast! 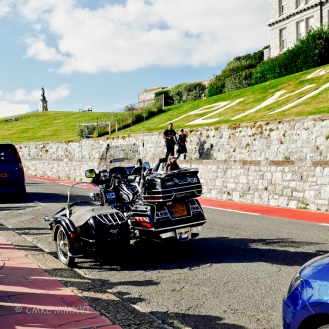 What’s wrong with this picture? Our late brother would have loved this sidecar! 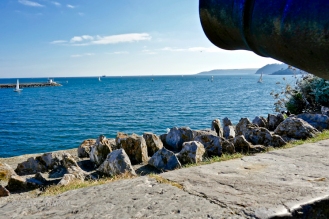 Drake may have look out here, scanning the horizon for the Spanish Armada.

With this view we approach Sutton Harbor & the Barbican.

And now we better go for fish & chips!