Our exchange home in Brittany was located in the department of Morbihan on the southern coast near the town of Vannes, as detailed in my previous post. If you continue in a westerly direction along the coast, you reach the department of Finistère forming the end of the Brittanic peninsula. Finistère means ‘end of the earth’. In Breton, it has the same meaning, or does it? Penn-ar-Bed could be interpreted just a little differently. ‘Penn’ stands for head, chief, peak, cap, and, yes, the end. ‘Ar’ is the definite article. ‘Bed’ means world or universe in all its Celtic and Gællic variations. Therefore, one might argue Penn-ar-Bed actually means ‘Leader of the Universe’. Just having a little fun with you 😉

But when you look at this countryside, tell me I’m wrong! And these pictures only show a tiny section of the coast near the ancient harbor town of Concarneau. During this trip to Brittany, we never made it all the way to the actual land’s end part of Penn-ar-Bed, where the coast is truly spectacular. 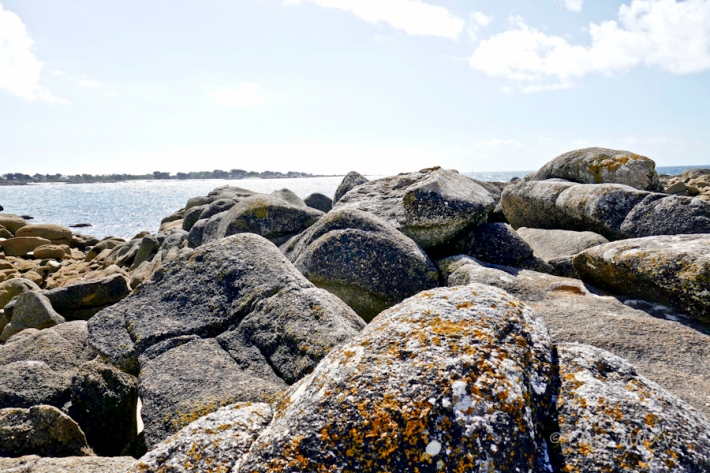 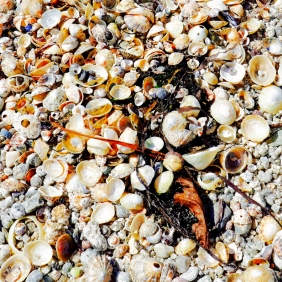 Brittany has always been a preferred summer play yard for Parisians and other city dwellers, who spent their vacations here in multi-generational family groups. Le Cabellou Plage, a suburb of Concarneau has been a popular summer destination since the late 19th century. 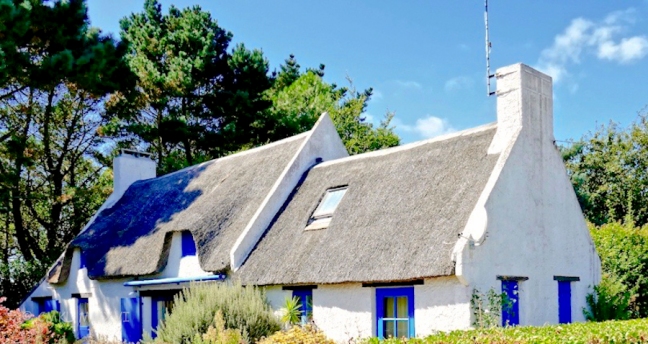 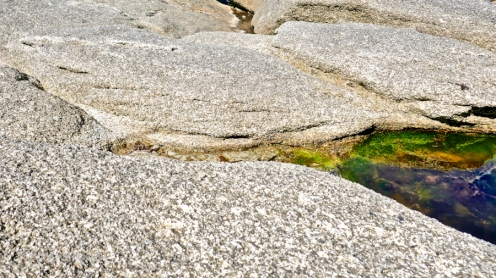 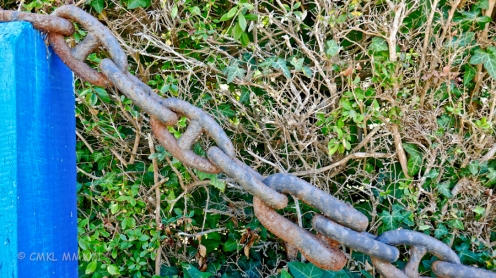 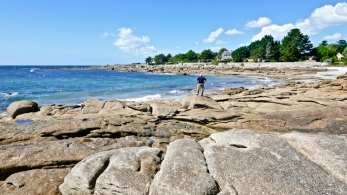 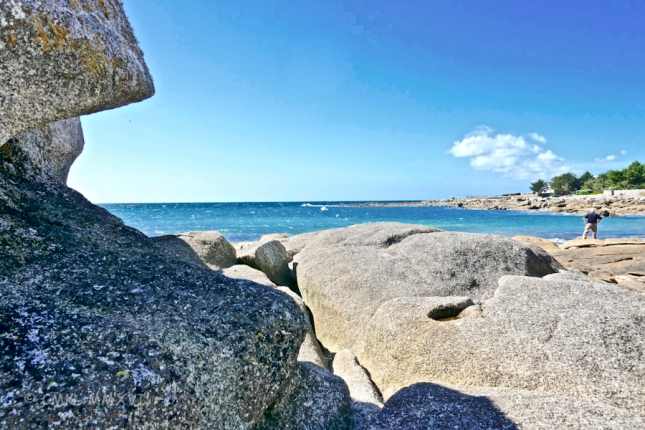 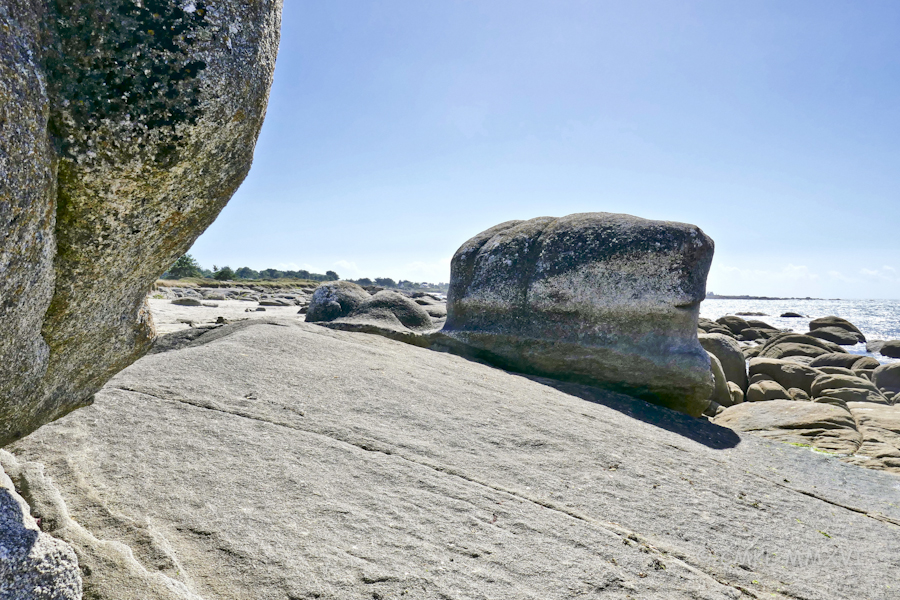 After our visit with an old friend in Le Cabellou, we returned to Mor-Bihan to visit a bunch of other, very old friends indeed – Les Alignements des Menhirs à Carnac. The alignments of mega [large] liths [stones], those lines and lines of upright planted rocks in the area around the town of Carnac. But first, we stopped at Carnac Plage for a quick survey of the yacht harbor and a stroll along the Boulevard de la Plage.

Not much happening during the week in September.

This sea of masts represents tough, bare-bones, competitive sailing. The ocean out there is a sporting paradise for the young. 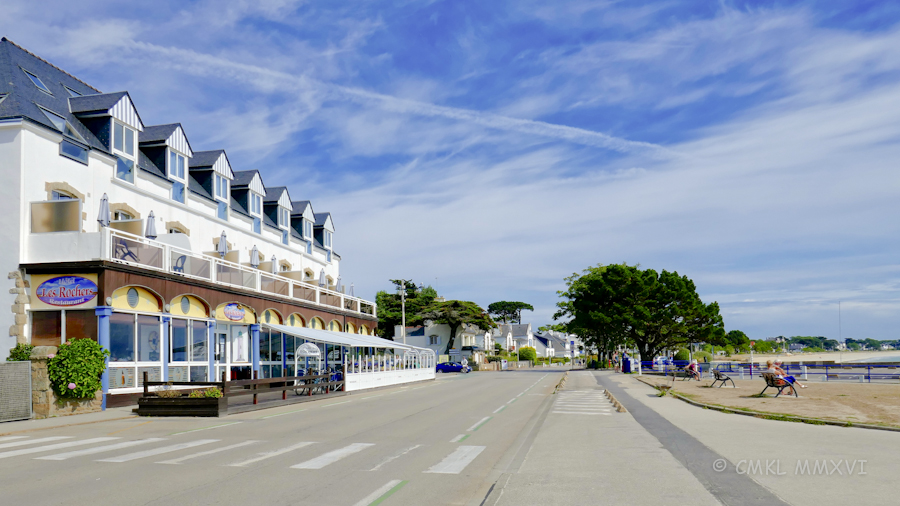 At our time in life, we’re more the perambulating types!

Menhirs, dolmen, tumuli, and standing stones, megaliths, and cromlechs, Brittany is full of these large rocks [Megaliths] which were planted singly [Menhirs] or in groups as burial chambers [Dolmen, or, if the dolmen itself is buried under pebbles or dirt, it’s a Tumulus] and sometimes the menhirs were positioned in circles [Cromlechs]. Why? That’s anybody’s guess. Working the quarries, dragging huge chunks of rock through the countryside – at least it’s a relatively flat coastal region! – to bury them upright in straight, parallel rows, hundreds of meters long and sometimes associated with circles of rocks, sometimes with burial chambers has had to be based on serious symbolic needs of these, as yet unknown people(s). In each of the three major alignments near the town of Carnac: Kerlescan, Kermario, and Ménec, the menhirs are aligned in descending size from W to E and each group is positioned at a specific angle against the next. Kerlescan is pointed toward the equinox sunrises, Kermario is oriented toward the summer solstices, while the main alignment, Ménec, is angled right between these two. There are other major menhirs on the Quiberon peninsula and other locals along the coast which may have been associated with these alignments in prehistoric times. Theories abound!

There are currently roughly 10 000 menhirs and formations thereof in Brittany. It is estimated that there might have been as many as 50 000 at the height of the Neolithic Era. It appears that some of these mysterious rock formations go back some 7000 years. So far, few reliable indices could be gathered to assign authorship to these megalithic activities. The acidic dirt dissolved buried remains of early neolithic persons beyond modern men’s current ability to extract DNA materials. As of now, we simply don’t know who started the crazy idea of planting rocks like peach trees in an orchard.

Later activities, including but not limited to Celtic Druids gathering mistletoe during the full moon and having clandestine ceremonies within the Holy Stone Circles are romantic fantasies. Nevertheless, these druidic activities are historically founded, but as a second-hand use of existing stone formations. Personally, I’m going to stick with the image of Druids with little golden sickles because I am a huge fan of Asterix. In the sixties, when I first encountered alignments of menhirs, one could play among the rocks, even climb on them. Possibly a reason why I have somewhat proprietary feelings about the big lugs. Nowadays, fences prohibit any connection between humans and menhirs. Pity. 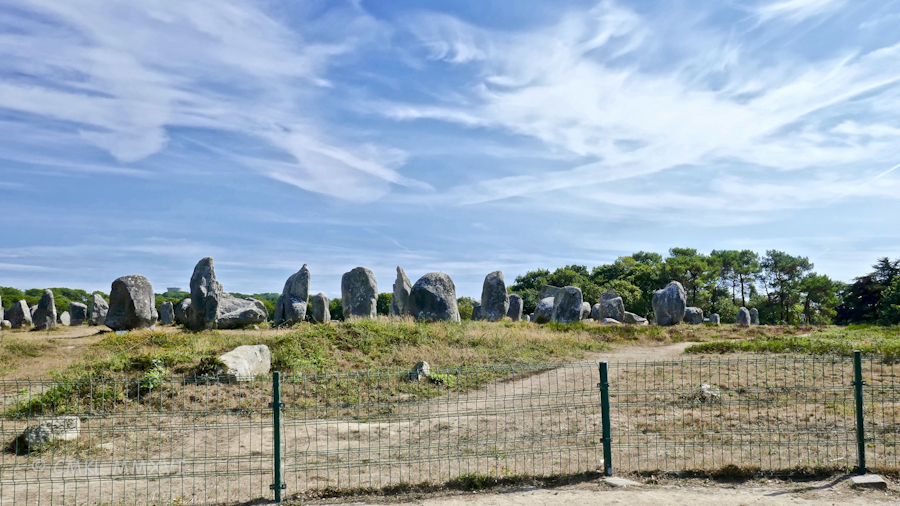 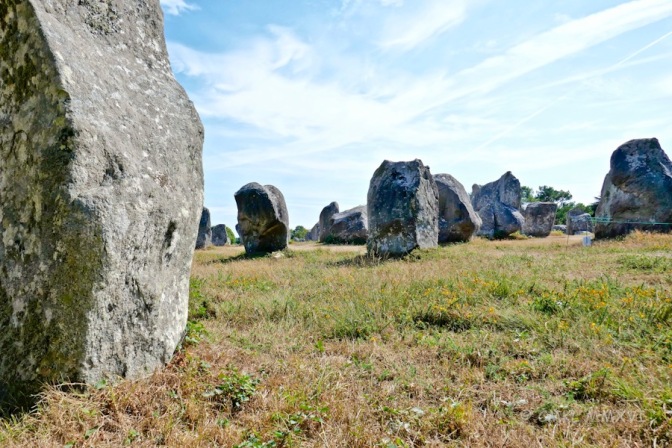 One can book guided tours to walk among the menhirs to some extend. But even then one may not step inside these fenced off areas meant to allow re-growth of vegetation that was overgrazed by local sheep. 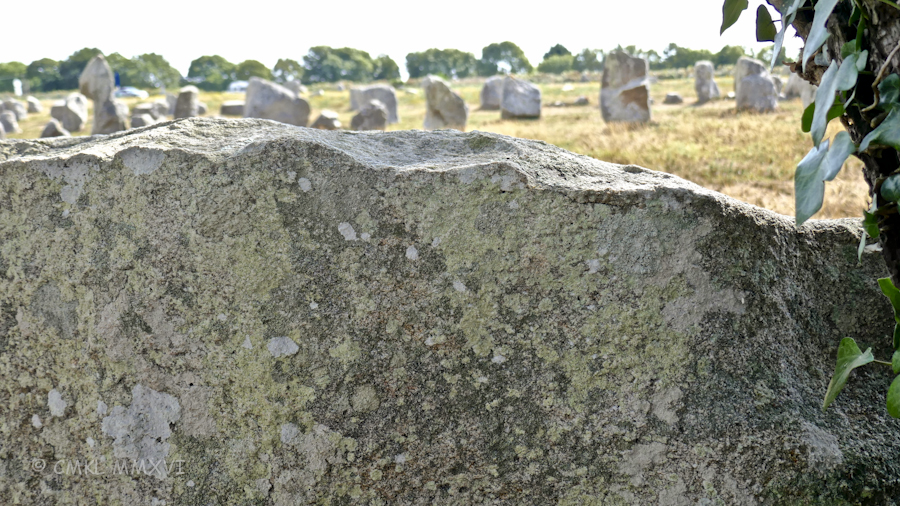 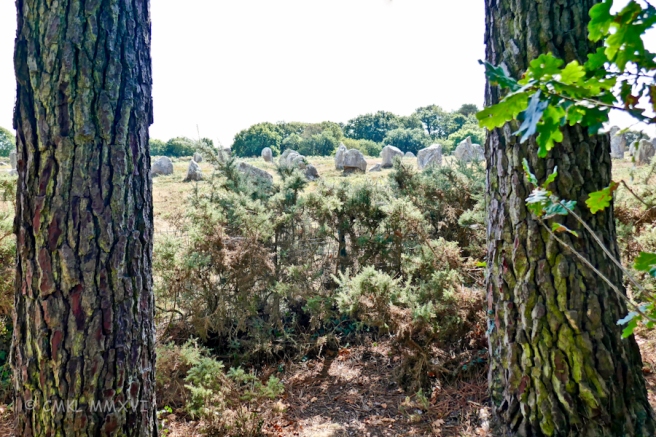 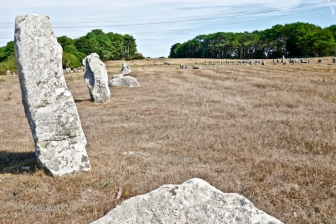 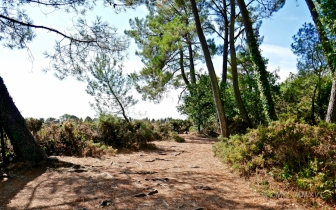 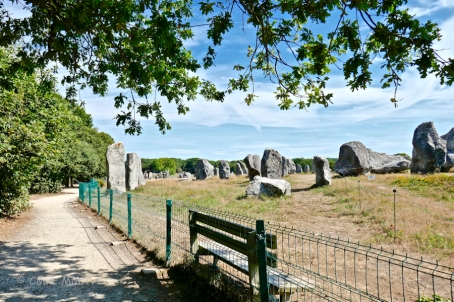 Not much chance to rest on this one. 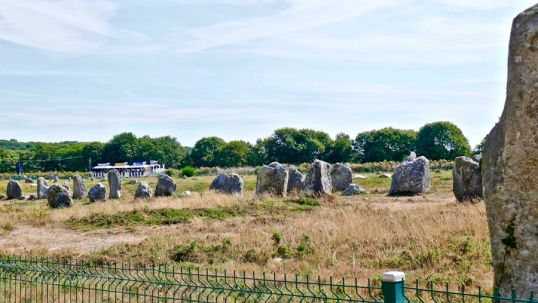 French tourists love their electric choo-choos. We have one here in Saintes and you find one pretty much at every tourist destination in the country! 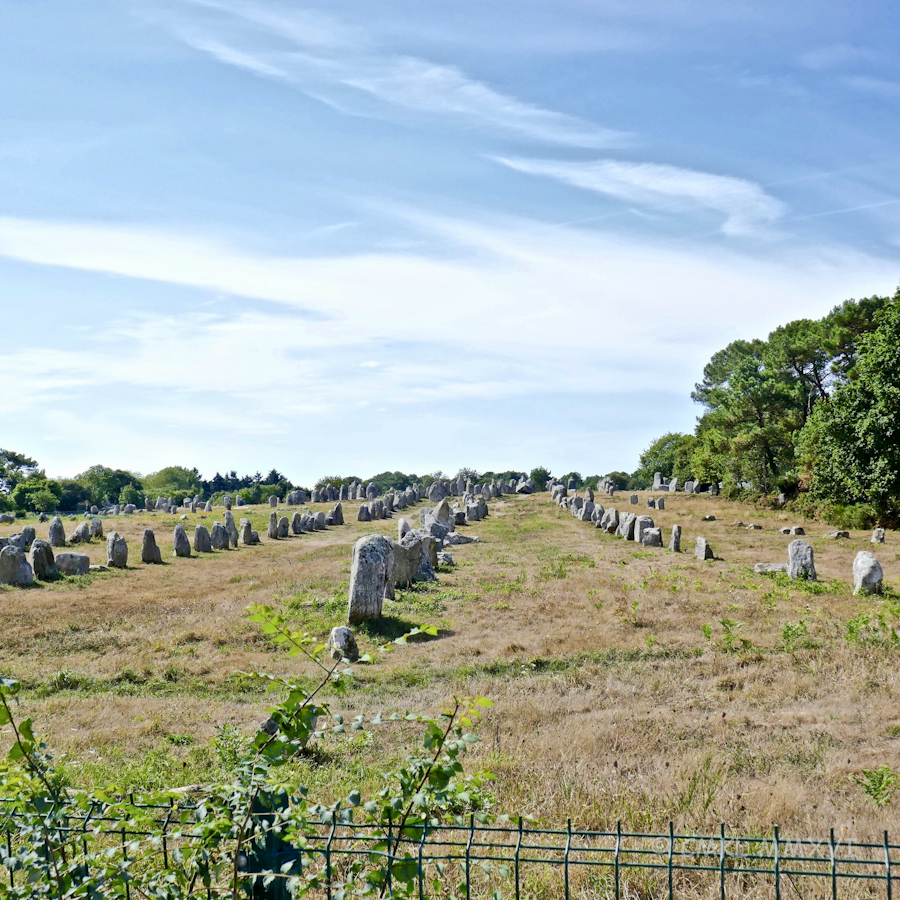