Rochefort-en-Terre is a village of about 700 inhabitants in the Morbihan department of Brittany. The village receives roughly half a million visitors each year because it is designated as a ‘Petites Cités de Caractère’ and as a ‘Villes et Villages Fleuris’ or flowering village. It also has a castle and it overlooks a river valley from an elevated position. In June, a French TV network, France2, visited the village for a primetime broadcast after Rochefort-en-Terre was accepted into the prestigious circle of the most beautiful villages in France. There are less than 200 of these villages in the country and a community displaying the Les Plus Belle Villages de France logo can expect to double their visitor count. It will get quite crowded in the lanes of Rochefort! France2 asked the mayor how they manage to be such a tourist sensation? He joked, “We don’t have the sea, but we have old stones, charm, and creative ideas.” No surprise with over 40 artist studios and artisanal workshops in the village!

As far as charm goes, judge for yourselves – caution, cuteness overload imminent.

We parked well outside of town along the curb, just short of the “pay parking” markers.

The short hike into the village was certainly no hardship.

Checking out the side streets

Walking the length of the lane … 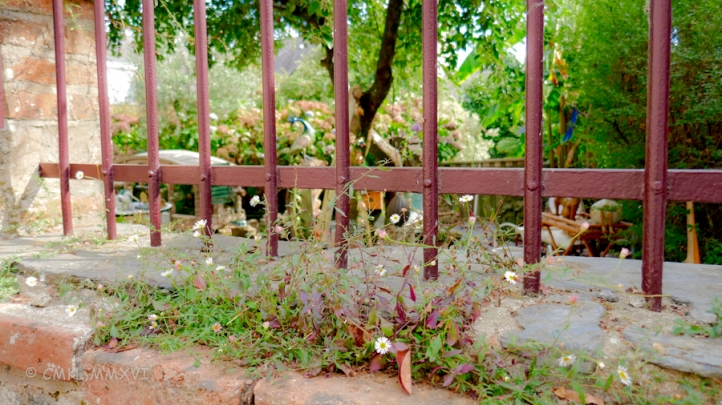 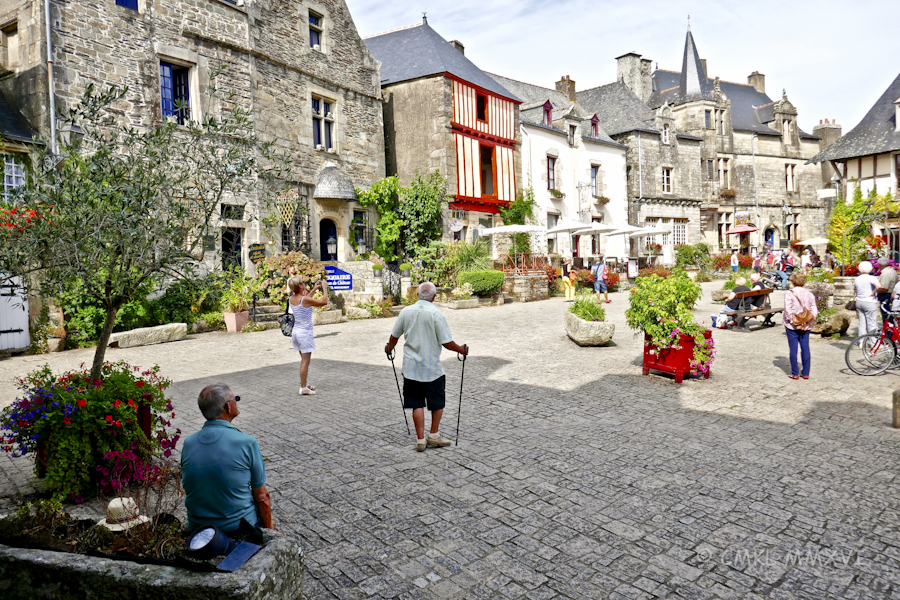 There was something peculiar about the house in the center of the picture above. In recent online images, the timber framing showed a different pattern from the one we saw here on September 12, 2016. Straight up-and-down wooden studs are a framing technique called close-studding. It became popular in France around the 15th century, especially in Normandy. This method uses a lot more timber than conventional square framing, so it was extravagant and mostly used in posh townhouses to demonstrate the home owner’s status. It could also be found in stone houses, like this one here, to accentuate the front. 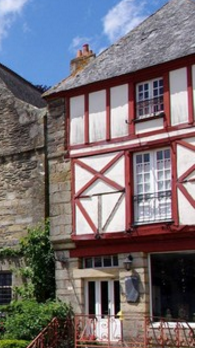 This is a screenshot detail I took of the photo by Cécile Haupas/Fotolia, which was used in an article in the evening edition of a popular publication called “Ouest-France”. This article published Wednesday, June 8, 2016, asked the question: what does a favorite French village look like? Or “À quoi ressemble le village préféré des Français ?”

The framing of the half-timbered front in Ms. Haupas’ picture shows very widely spaced studs upstairs and square framing below. This is the same framing style I noticed in all the other online pictures of this house.

What happened between June and September? Reframing a half-timbered façade in the span of three months is pretty much impossible. Unless. Unless it’s not really half-timbered but a fake. Even during the heyday of timber framing, lavish close-studding was on occasion mimicked by applying “cosmetic” studs. Just about the time my conspiracy radar went off the charts, I found another picture. This one is also from the Ouest-France archives, credited to Thierry Creux, their staff photographer. It shows a scene from the filming of the France2 TV program about Rochefort-en-Terre.

As you no doubt noticed in the left upper corner of the photo is our half-timbered house in the midst of a façade renovation, which apparently began quite some time earlier. The close-studding and plastering appear finished, as one can see the outlines of straight studs not yet painted. One can even see some dark blotches in the plaster which are still visible in my picture. I feel so much better now that the building’s Bretonnic Renaissance authenticity is confirmed, don’t you? Unless the studs are just sticks …. oy vey! 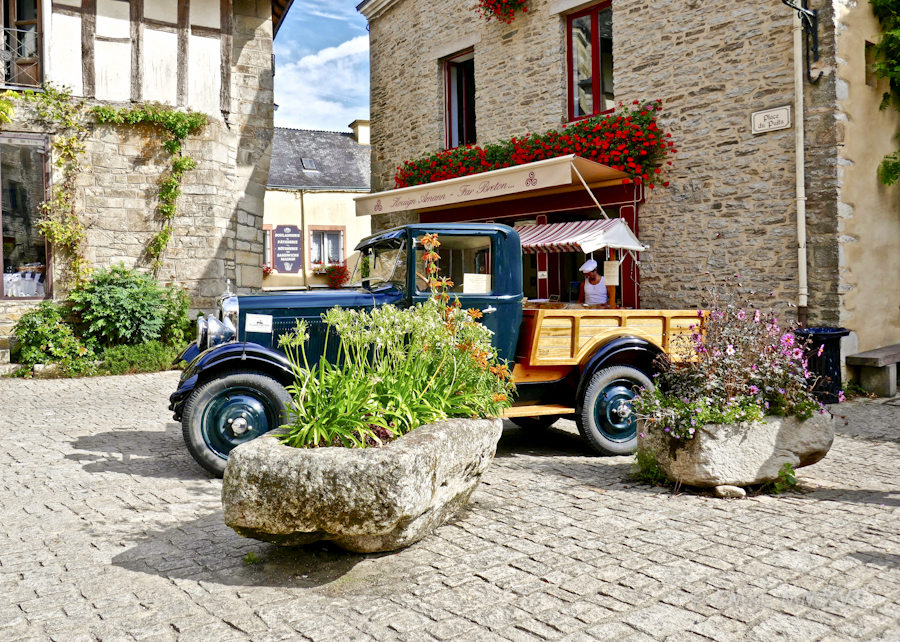 This is for my friend and oldie aficionado T. Michael J. in Michigan. Such a beauty in immaculate condition!

Meanwhile, we meandered between just as well maintained, century-old buildings dressed with an abundance of geraniums. During the 20th century, the castle above the town was owned by an American painter named Alfred Klots. It was he who initiated a town-wide annual flower growing competition in 1913, the beginning of Rochefort’s evolution into one of Frances most beautiful villages.

This bakery is famous for its spice cakes! 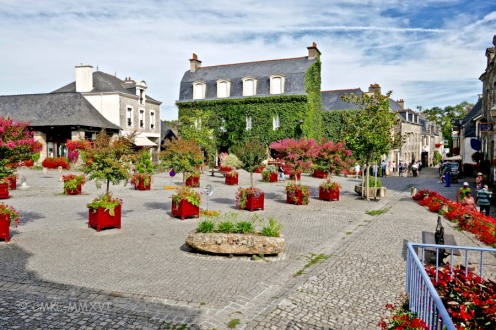 Views from the City Hall porch, along the square & rue Saint-Michel,

to the S down rue Candre.

Continuing along rue Saint-Michel, I first noticed this interesting reflection in a store window. An ivy wall highlighting a golden leopard,

before sitting down on a low stone wall to rest a little, where I was soon joint by this golden-eyed beauty.

Toward the eastern border of the village the atmosphere shifts from overwhelming geranium red to soothing slate gray with green applications. 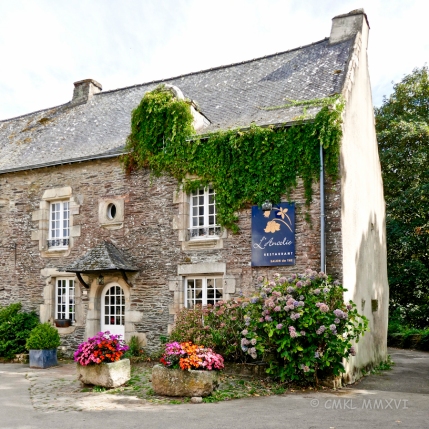 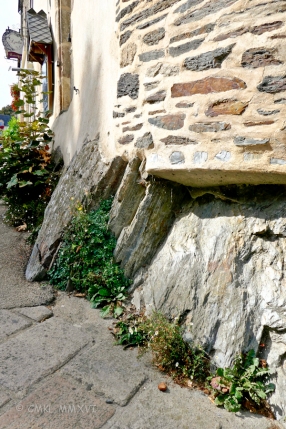 What an incredible foundation! 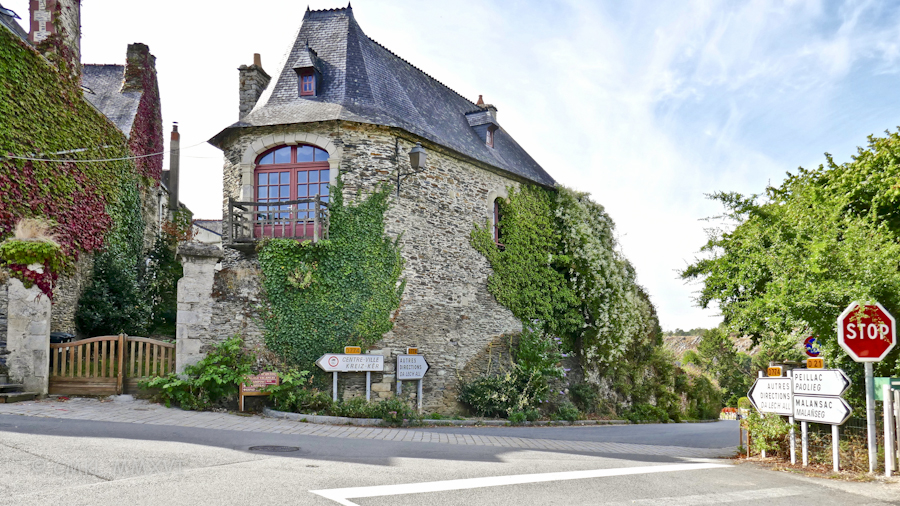 Next post, the castle of the Seigneurs de Rochefort – at least, what’s left of it!