Before we delve into the history of feudal families in Breizh, allow me to advise you of a grave error I committed in my previous post about the village Rochefort-en-Terre.

In France, the television network France2 hosts a reality show each year titled Village Préféré de France [The favorite village in France], a program which is apparently hugely popular and the existence of which I never knew. It’s a kind of beauty contest for small communities across the country in which the viewers get to vote for their favorite village. Fast forward to this season’s edition, won by no other than our own favorite village, Rochefort-en-Terre. The announcement on life TV in June was a huge affair, as you can see in the video in this link:

Even though the video is in French, I’d like to encourage you to watch it. It shows not only the village, which is nice enough in itself but more importantly, it demonstrates quite vividly how much the French people appreciate ‘Patrimoine et Terroir’, their local heritage. Something we encounter daily living here. Thus, when we met with our home exchange family in Arradon and they told us excitedly of Rochefort-en-Terre’s recent accolades, I mistook “village préféré” for “les plus belles villages” and the rest is down to my poor knowledge of French television. I emailed the village today, receiving confirmation that they have been classified as one of “Les Plus Belles Villages de France” since 2009. Such a great honor, since of the roughly 32 000 eligible villages in France, only 155 have been chosen as of September 2016!

I realize this may not be of the highest priority for you. However, as a former scientist, I can’t tolerate factual mistakes, least of all my own. Thanks!

Now go and watch the video!

One of the oldest Breton families, the feudal house of the Seigneurs de Rochefort was first documented in 1117. There is a rocky cliff in the shale outcropping high above the valley of the rivers Gueuzon and Arz that the family used as their home base. It had been used as a defensible plateau since Gallo-Roman times, and here the Rochefort family built a fortress dominating the valley. From this eagle’s nest, they controlled an important roadway into the interior of Brittany, collecting tolls from passing travelers. The family also received a substantial income from the local slate quarries. The lords of Rochefort maintained their regional leadership over the centuries, serving as Generals in Bretonnic warfare, as Governors of Nantes and Rennes, as guardians of the Unity of the Duchies of Brittany all the while gaining further titles, many through smartly calculated marriages.

Jeanne, Viscountess Donges, Baroness Ancenis, Lady of Rochefort, Assérac, Chateauneuf-en-Saint-Malo et Ranrouët, was the last direct descendent when she married Jean, 15th Lord of Rieux in 1374, thus conjoining the Breton Rochefort and Rieux lines under one banner. The Rieux family, neighbors, and allies in Morbihan had been around a little longer than the Rocheforts. Their earliest ancestor is believed to have been Alain, Count of Vannes, later King of Brittany who died in 907. A mere 888 years later, in 1795, the name died with Louis Charles Marie de Rieux Marquis d’Assérac etc. when he was shot at age 24 during a squirmish between l’Armée des Émigrés and revolutionary forces following the landing of Quiberon.

With Lady Jeanne’s wedding, the House of Rieux also reigned in the name of the Rochefort domain, until the lordship passed through marriage to the House of Coligny in 1567. From there it passed into the hands of Charles of Lorraine, Duke of Elbeuf in 1607, whose descendants sold castle and titles to Vincent Exupère of Larlan, Lord of Lanitré in 1660. Part of the domain was absorbed by other branches of the Rieux family and parts were sold. From 1771 to 1843 the extended Hay des Nétumières family took charge of castle Rochefort, then it was purchased by Dr. Juhel. His family, in turn, sold the estate to the American painter Alfred Klots in 1907, whose daughter-in-law, Isabel Klots [1917 – 2013], donated the Rochefort estate to the Conseil Général du Morbihan in 1978 after her husband’s death. Finally, in 2013 the deed was transferred to the Ville de Rochefort-en-Terre. Now the village owns the castle whilst once the castle owned the village!

In order to visit Château de Rochefort, we walked back through the village in a westerly direction to find a lane we had noticed before, which ended in stone steps against the former ramparts.

Walking the length of the lane … 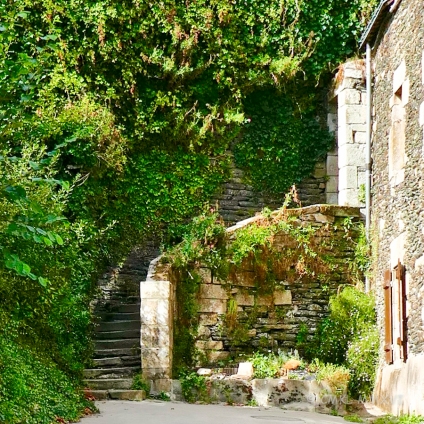 to climb the steps around the herb garden …

leading into the castle grounds above. 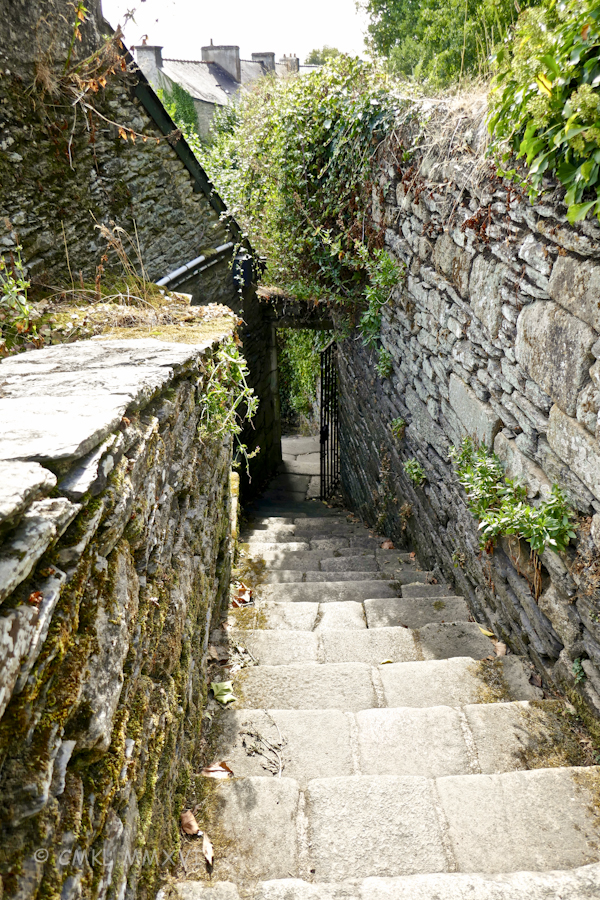 As we had hoped, the stairs took us up to the castle hill. This elevation afforded quite a different view of the village.

I hope this image demonstrates how these ancient villages are well-nigh living entities, growing and declining, possibly to grow again, according to their inhabitant’s fortunes, needs, and abilities.

The fortune of Château de Rochefort rose and fell over the centuries as well. Twice over the centuries, in 1488 and in 1594, the castle was sacked and subsequently rebuilt. But the revolution put a permanent end to its long, proud history. After the last sacking, looting and burning in 1793 the castle of Rochefort was left lying in rubble forever.

If there is no longer a castle, why are we climbing up castle hill to see the Château de Rochefort?

Well, children, in 1843 the new owner of the residual estate, Dr. Juhel, converted the only structure still standing, les écuries, the stable block, into housing. That’s the ‘castle’ which was bought by American painter Alfred Klots in 1907. French-born Klots had fallen in love with Brittany, Morbihan – who can blame him! – and especially the romantic legend of the castle of Rochefort. He purchased the entire shootin’ match and started to build a brand new castle of his own. Fortunately, he was married to a wealthy woman who could afford his dreams! Let’s go and have a look at it, shall we?

Part of some structures near the ramparts has been turned into the Naïa museum of otherworldly art in 2015. The museum/gallery is named after Naïa, the last known regional witch. 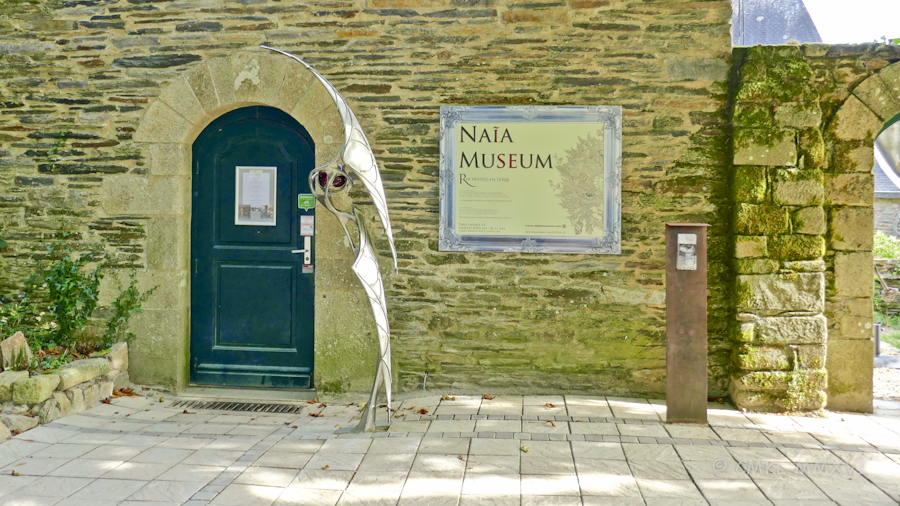 While I was checking out potential sorcery, the husband was resting in front of the few remaining wall sections of the Medieval fortification that once stood here. 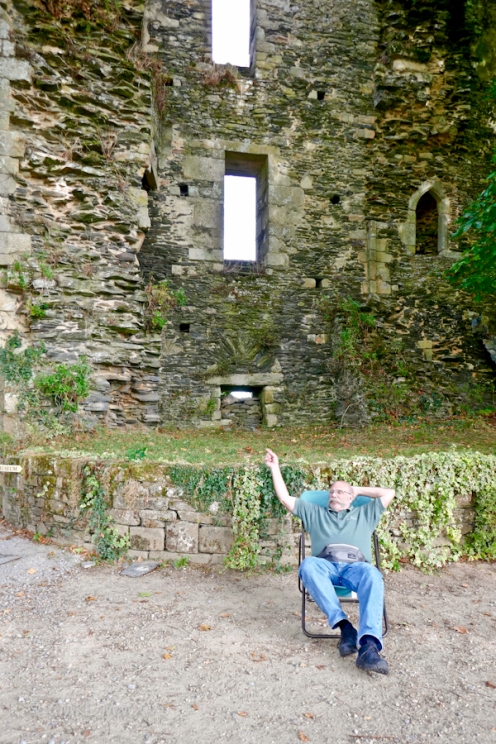 We proceeded through the gate into a donjon no longer there. 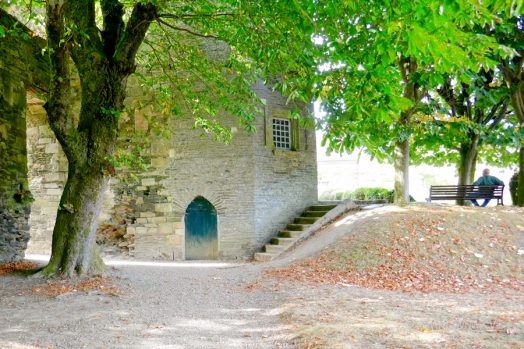 Alfred Klots and his son Trafford, both painters, did much to promote the village. Alfred initiated the first ‘Geranium Window Boxes’ competition, ultimately leading to the Ville Fleury and Les Plus Belle Villages designations. The château was turned into a convalescent home for American soldiers in WW I and all family members contributed to the war effort during WW II. Both generations of Klotses promoted and supported a number of artists-in-residence programs and other artistic endeavors. Still today the Alfred and Trafford Klots International Programm for Artists, one of their foundations, is alive and well, providing opportunities for artists of all media to stretch their imaginations in the inspiring Breton atmosphere. Isabel Klots, Trafford’s widow made sure to perpetuate the family legacy.

A few more steps and you can catch your first glimpse of Mr. Klots’ neo-gothic fairy castle. 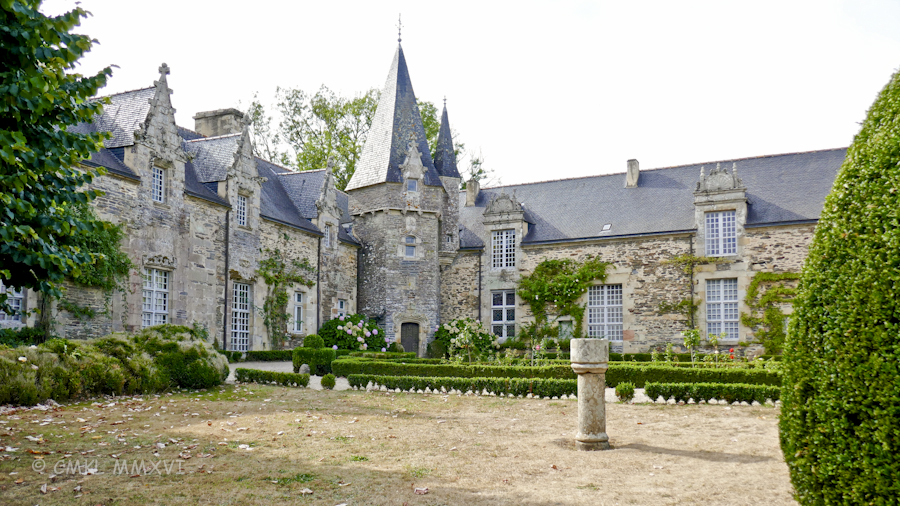 Whenever possible, building materials from the original structures were incorporated into castle construction. Additionally, Alfred Klots purchased original architectural features from another castle, Château de Keralio which, interestingly, also once belonged to the Larlan and Hay des Nétumières families. Just like Château de Rochefort, it was abandoned during the revolution. These carved dormers, pediments, and gates resulted in a classification of the castle Rochefort’s façade and roof as a historical monument. The entire structure has been included in the register of monuments of the 20th century. 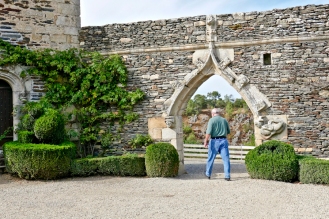 View from overlook toward gate 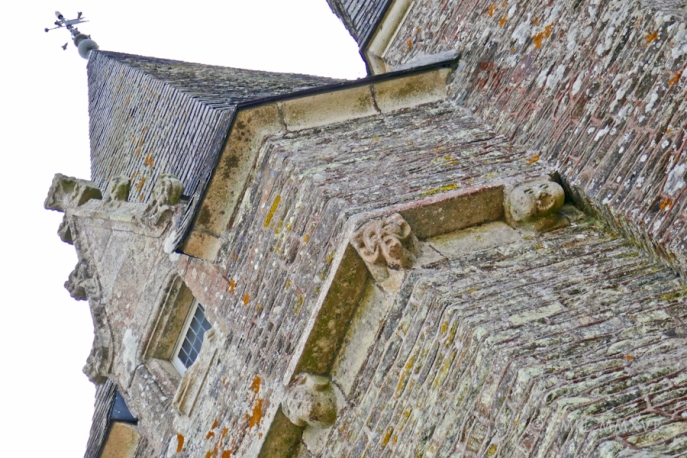 We left the grounds following a path toward the official entry gate to the estate thus passing by the front of the castle. As you can see, castle-ownership is a double-sided sword. The upkeep of such a large estate is enormous, not to mention the renovations and repair. Currently, large portions of the building are unsafe for visitors and plans for structural engineering are underway. The general council of Morbihan has promised over 1.7 million Euros to augment the village coffers if certain conditions can be met. Let’s hope the work will commence soon!

I read in one of the many websites I consulted about Rochefort-en-Terre that “une glycine de couleur mauve, plus que centenaire, recouvre la façade … de la mairie”. I found a picture showing this hundred-plus-year-old Wisteria. It’s a poor picture and it wasn’t meant to be in the line-up, but what can you do – a vine that old, you have to honor it! Also, it’s visible in the background of the video clip, as the guys are standing in front of the mairie.

You might remember this side view of the wisteria from my last post. Since it’s not Spring, sadly it’s not in bloom. 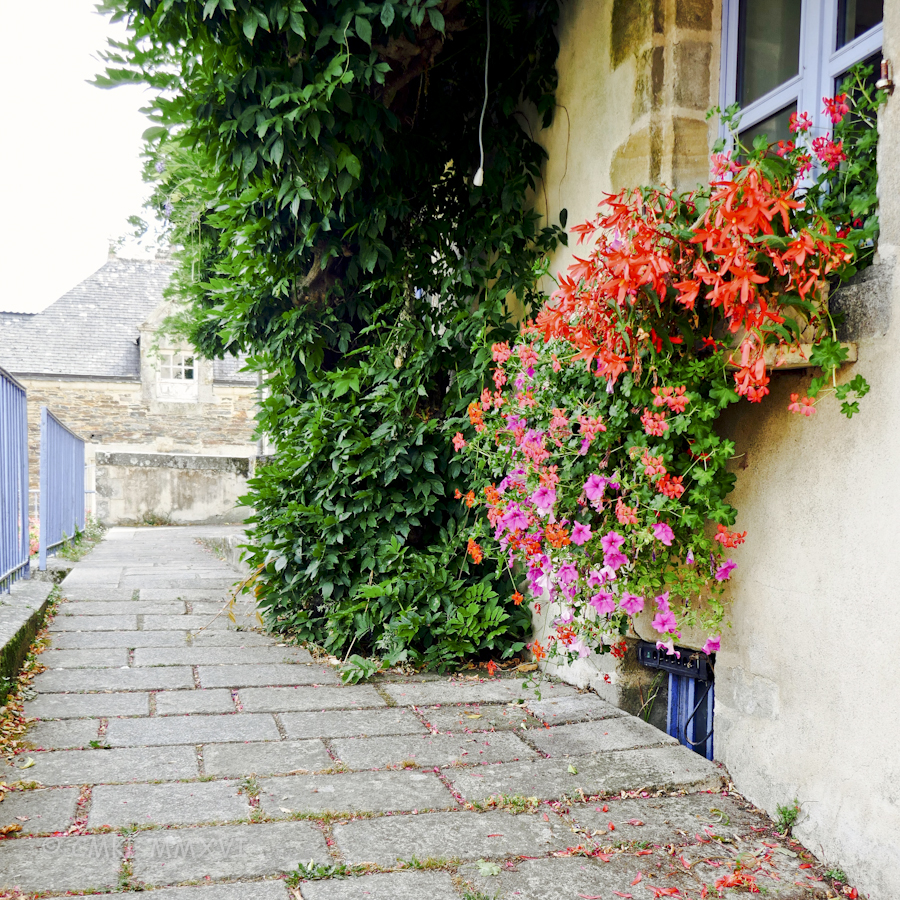