In addition to exploring Vanalinn, the Old Town subdistrict in Tallinn, the city offered many more opportunities for activities and sight-seeing. One day, we opted to visit the subdistrict of Kadriorg with its baroque Imperial Palace, the modern Presidential Palace which was built in 1938, and KUMU, the Eesti Kunstimuuseum. I got such a kick out of many Estonian terms, like the name for a museum of art. In Eesti as in Deutsch, Kunst means art and the double u is pronounced like a long moo sound. Owing to seven centuries of German speakers in the area of modern Estonia, the originally Finnic-Ugric language incorporated Germanic expressions quite heavily.

A 20 min tram ride took us from the Kanuti stop near our place in Uus to the beautiful Kadriorg Park. A comfortable promenade through the park brought us to the palace Tsar Peter commissioned for his Tsarina Catherine, hence it was named Kadrioru Loss in Estonian or in the German of the time Schloß Catherinethal. All of it means the same, “The Valley of Cathrine’s Palace”.

Climbing to the garden level. 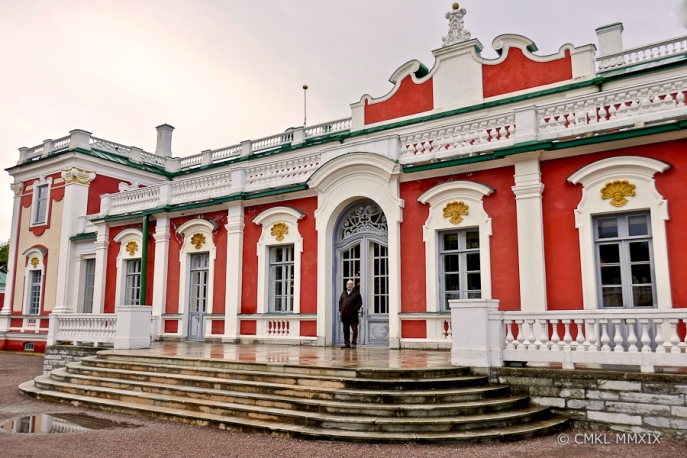 The grounds behind Kadriorg Palace were subdivided by a white retaining wall into formal gardens nearest the palace and treed parkland beyond which surrounded the Presidential Palace of the Republic of Estonia. In the photo above, one can just see a small section of the copper-clad roof of that stately pink building. On our way to the KUMU, we passed the Presidential Palace. There was no fence, no barrier to keep the public away. The only visible protection for the president was a two-soldier Honor Guard flanking the front door. They were armed and they did guard that door in a serious and determined fashion, but what a contrast to some other presidential residences. I read that the president’s spouse likes to shop at a nearby organic greengrocer, equally a quite significant lifestyle difference.

… but since it was quite breezy and blustery, we soon decided to move indoors to check out the tzarist quarters. 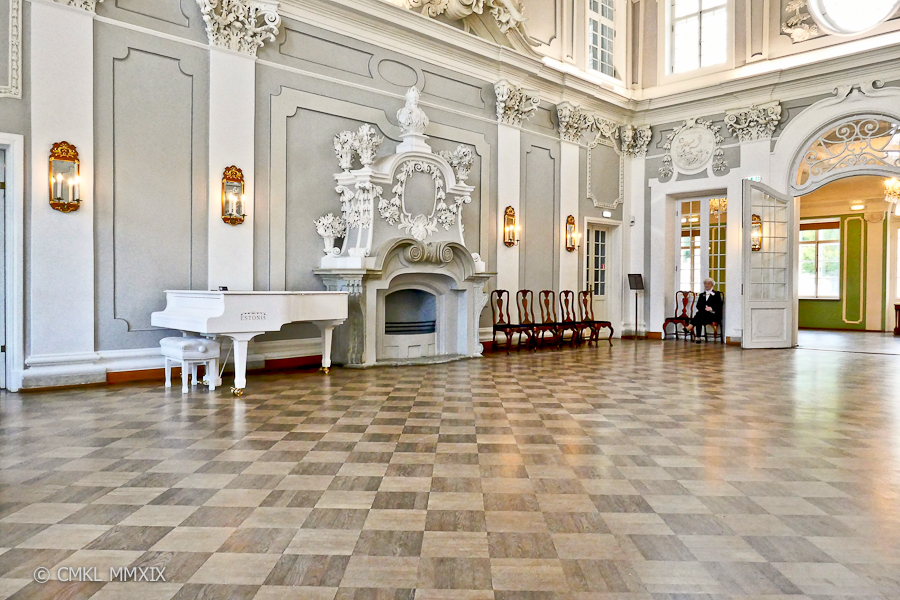 We roamed through the upper floors of the palace which were used as an art museum. More interesting to me, my apologies to the palace curator, was the array of Kachelöfen otherwise known as tiled stoves. 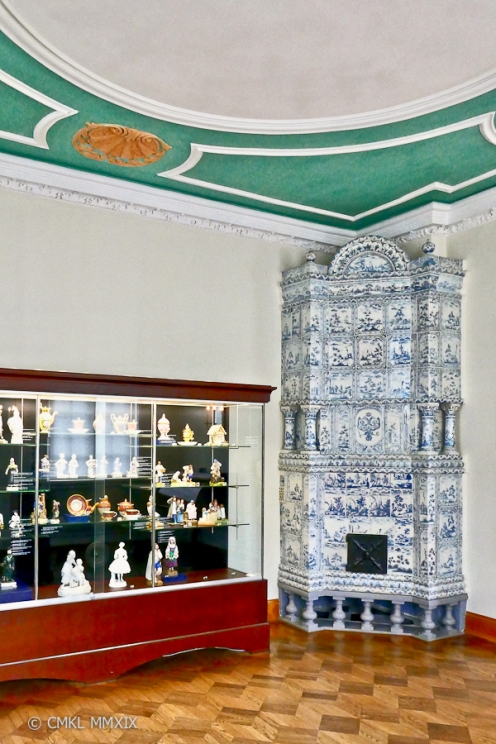 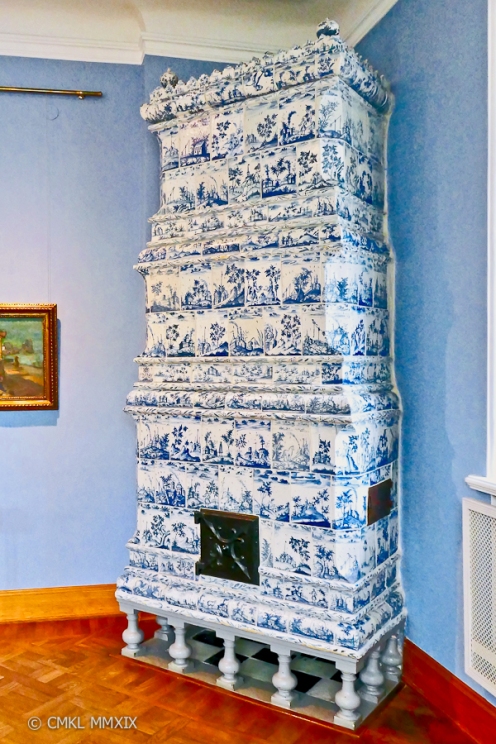 Not a Kachelofen, but pretty nevertheless.

The stove pictured below, we encountered again in the Eesti Kunstimuuseum in a gallery dedicated to Conflicts and Adaptations. Estonian Art of the Soviet Era 1940 – 1991.

The palace apartments were essentially unfurnished but we did come across this rather spectacular display case entirely clad in malachite with bronze details.

The bibelot cabinet is possibly a smidgen on the gaudy side, but there was certainly no fear of color or elaborate decorations by the former residents of Catherine’s palace as we also noticed in their choices of chandeliers. It is said that both monarchs quite liked over-the-top ornamentations.

Just a few steps onward from the Imperial and the Presidential Palaces we found the contemporary Kunstimuuseum. Quite stunning as well, but what a contrast in styles! 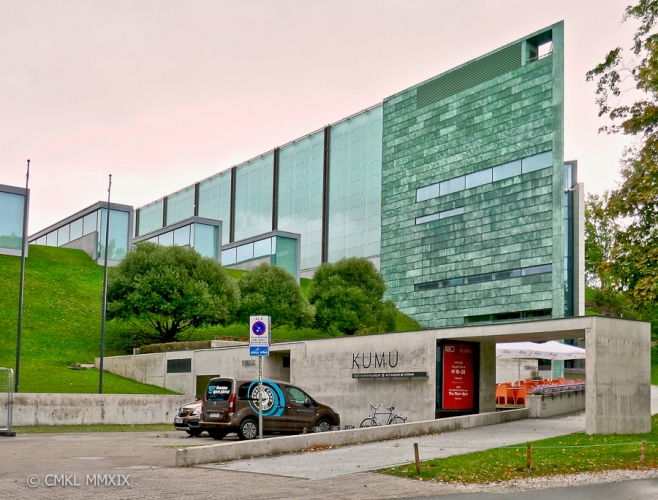 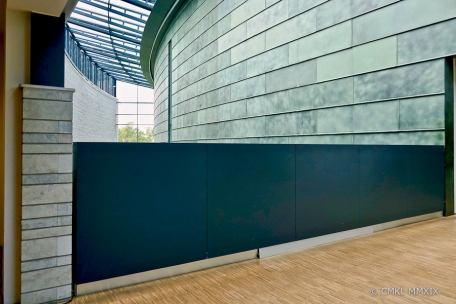 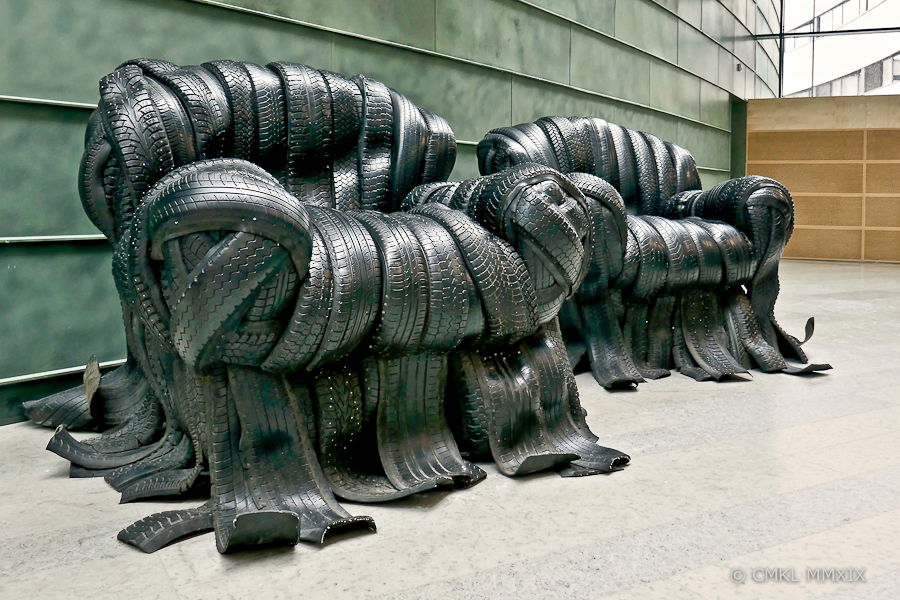 KUMU’s third and fourth floors of exhibition space are dedicated to Estonian art from the early 18th century onward. The fifth floor is given over to contemporary and experimental art and expression, both by Eesti artists and the international artistic community. The museum sees its mission as a center for education and entertainment to foster the arts and the artists who create it, its motto being Art lives Here!. KUMU wants to be “a place for reflection that carries a message of stability, a place that creates and provides experiences, and a creator and interpreter of meanings“.

To celebrate the centenary of the Art Museum of Estonia, KUMU organized a unique temporary show in their Great Hall which we were lucky enough to catch. It was called Open Collections: The Artist Takes the Floor and it led the visitor through space and time of artistic expression for those one hundred years referenced through the museum’s collections. The most unusual aspect of this exhibit was its organization. The museum had invited contemporary Eesti artists to curate installations of their own and museum-owned work without the usual input by museum curators. Thus we got to experience the full impact of how the selected artists wished to interact with their audience.

The first and definitely most colorful installation we encountered was created and curated by Kristi Kongi. She titled it Shades of Pink and Green. A piece of violet – Peace, 2019. She combined her own, large-scale work with paintings by Henn-Olavi Roode [1924 – 1974] from the museum’s permanent collection.

I felt Kristi Kongi achieved great visual harmony in her amalgam installation. In particular, her placement of Abstract Studies sent shivers down my spine, it was such a perfect match of the vision of two artists a world apart. Not only in time but perhaps more significantly in culture and life experiences. Ms. Kongi, born in 1985, is a child of the Democratic Republic of Estonia which is a member of the European Union with a pro-western orientation, while Mr. Roode, born in 1924, lived through both Nazi and Soviet occupations of his homeland. He not only had to strive to find his identity as an artist but as an Eesti. Along the way, he was sent to a Siberian gulag for six years. He and his buddies in art school at Tartu University spoke too often of “Paris” which the Soviet Overlords interpreted as a plot to defect. Even after such a traumatic experience, Henn-Olavi Roode stubbornly continued to explore and develop his own artistic expression continuously contravening the official Soviet edicts for artists.

A further artist’s installation and even its poetic title were vaguely disturbing. On the other hand, for me as an anatomist, her work was also quite intriguing, you’ll see why below. Reading through her list of materials, I would have translated raskus not as weight but rather as hardship.

In contrast, the gently undulating Flawless, Seamless III mesh curtains were quite comforting, yet mysterious. Through her Flawless, Seamless series Marge Monko, who is Head of the Photography Department at the Estonian Academy of Arts, exploited post-WWII advertising images to explore femininity and feminism. In the installation here, Ms. Monko juxtaposed her work with a marble bust by the highly respected sculptress Hille Palm, who has expressed her own view of feminity in her wood and marble pieces.

And the flowers were quite mesmerizing to watch!

Among the museum’s permanent galleries, we encountered these heads, this astounding multitude of heads, not all necessarily human either in species or in character. 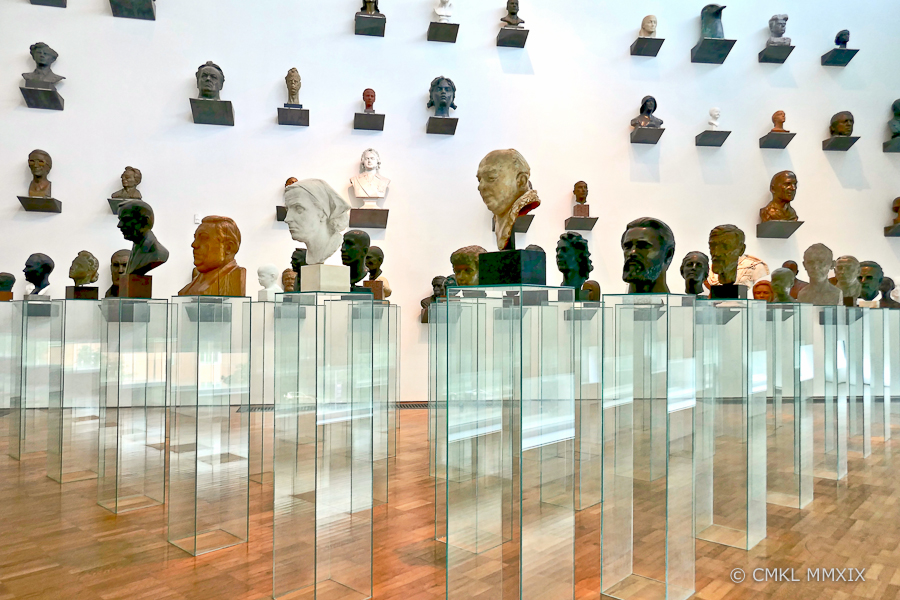 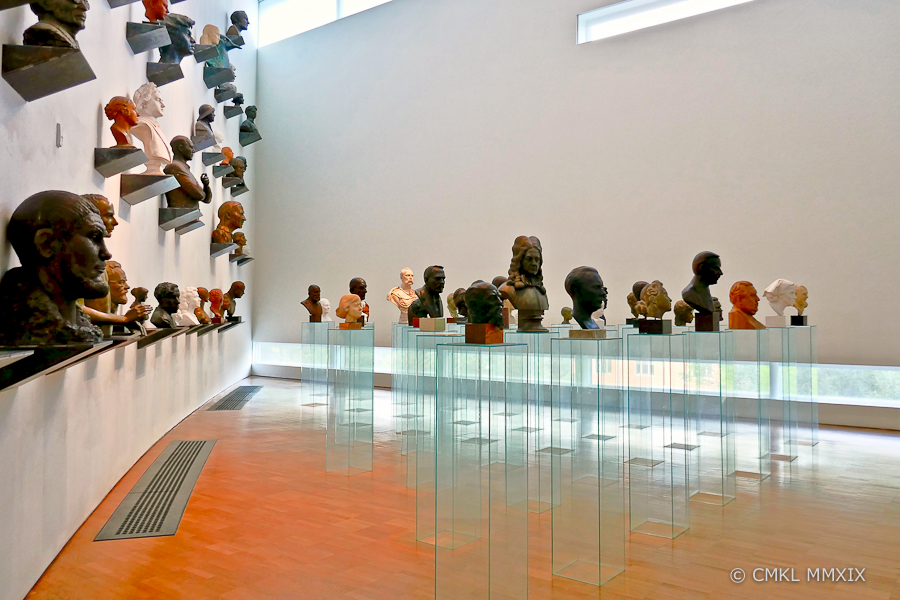 Among the works in the before mentioned Conflicts and Adaptations gallery,

we saw many thought-provoking and heart-wrenching images of an era of oppression and subjugation, among them a 1989 serigraph of the iconic graphic artist Leonhard Lapin titled Molotov-Ribbentrop II in reference of the pact in which the Nazis gave the Soviets the entirety of the Balticum as a present in exchange for Stalin’s blessings for the invasion of Poland only days hence. Lapin published this image just a heartbeat before perestroika and the final collapse of the Soviet domination over the Baltic States.

In this gallery, we also saw the work of Raul Rajangu, enfant terrible of Estonian postmodernism, represented through his Kachelofen image,

and the more apocalyptic return to his hometown of Viljandi. 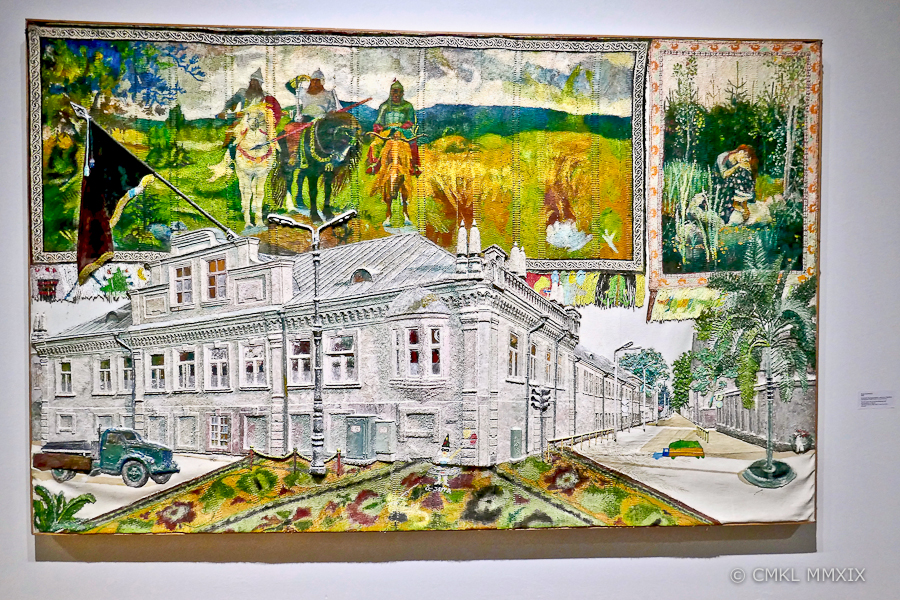 On our way out, we stumbled across a large gallery dedicated to the work of Estonian sculptress Maire-Helve Männik [1922 – 2003] who fled occupied Estonia for Sweden in 1945 and lived and worked henceforth in Paris. Männik was a life-long promoter of Estonian art and artists. Her son donated her œuvre to the Republic of Estonia in 2004.

Walking back to the tram stop, we again enjoyed the serenity of Kadriorg Park.