Forgoing my current travel-series through the Baltic States for an in-between post about our recent quick trip to Paris for the expresse purpose of visiting the Fondation Louis Vuitton to see their current exhibition dedicated to the life and work of Charlotte Perriand.

Naturally, one can’t forget that I’m an architecture and furniture fanatic, thus the Gehry-designed museum and Ms. Perriand’s work were an equally fascinating impetus for our visit. To set the scene, the FLV building is surrounded by gardens which in turn are framed by the vast expanse of the Bois de Boulogne parklands. 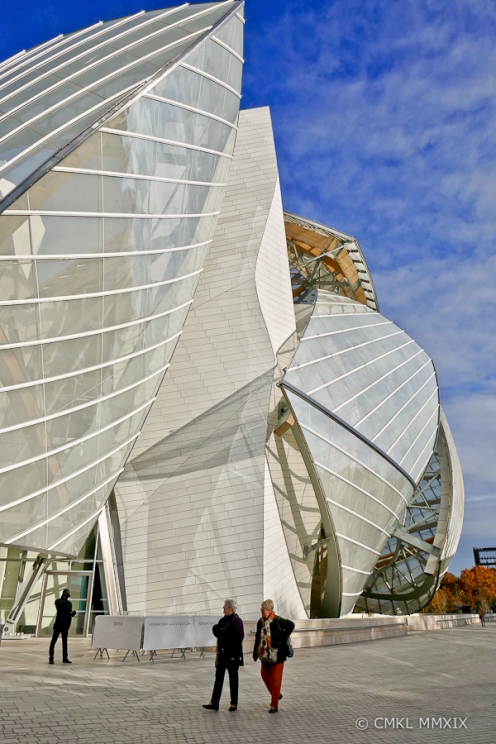 The interior of the Fondation Louis Vuitton is just as impressive and just as disorienting as the exterior. A grandiose, multi-story central hall grounds the building.

From there, a warren of galleries extends in all directions. They are connected by staircases, elevators and escalators, and exterior terraces. Despite excellent signage, one never quite knows where one is in this magnificent building, at least during one’s first visit! 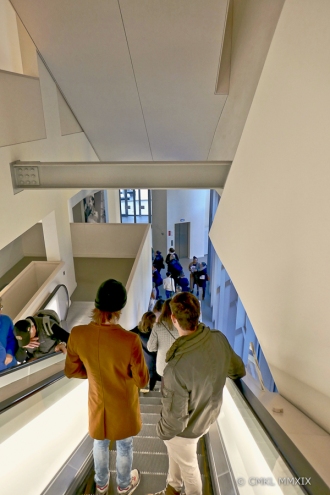 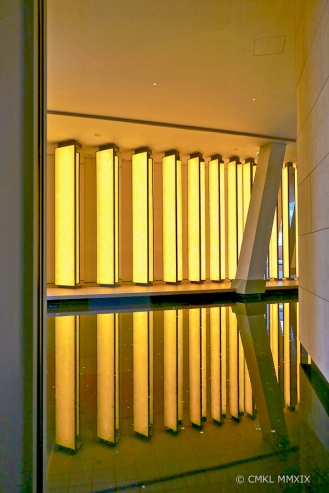 Although it was a Monday in November, the house was packed. So much so, that my initial venture into the Perriand exhibition was quite unpleasant. Too many dense clusters of people moved from panel to panel, from exhibit to exhibit, the room seemed airless and the atmosphere quickly became claustrophobic. I nearly bolted.

Yet, it was all too intriguing, I had to stay. But in order to get a reasonably clear shot of this room so awesomely dominated by Léger’s work I had to return at least five times. It was important to me, though, because it contained the raison d’être for coming to Paris to see this show. The famous Le Corbusier chaise longue. The B 306 / LC4 lounge chair is one of the best known and most enduring furniture designs of the early 20th century. While employed by Le Corbusier, Charlotte Perriand designed the chaise in 1928 applying Le Corbusier’s dictums and principles. I have been happily using one for twenty years to watch television. Voilà !

I was surprised to learn how extensively Perriand collaborated with other creative minds of her time, above all Fernand Léger. Only during my visit did I come to understand the full title of the show as seen on the poster in the entry hall, Le Monde Nouveau de Charlotte Perriand AVEC Georges Braque / Alexander Calder / Robert Delaunay and so forth, all of them inspirations or coworkers. 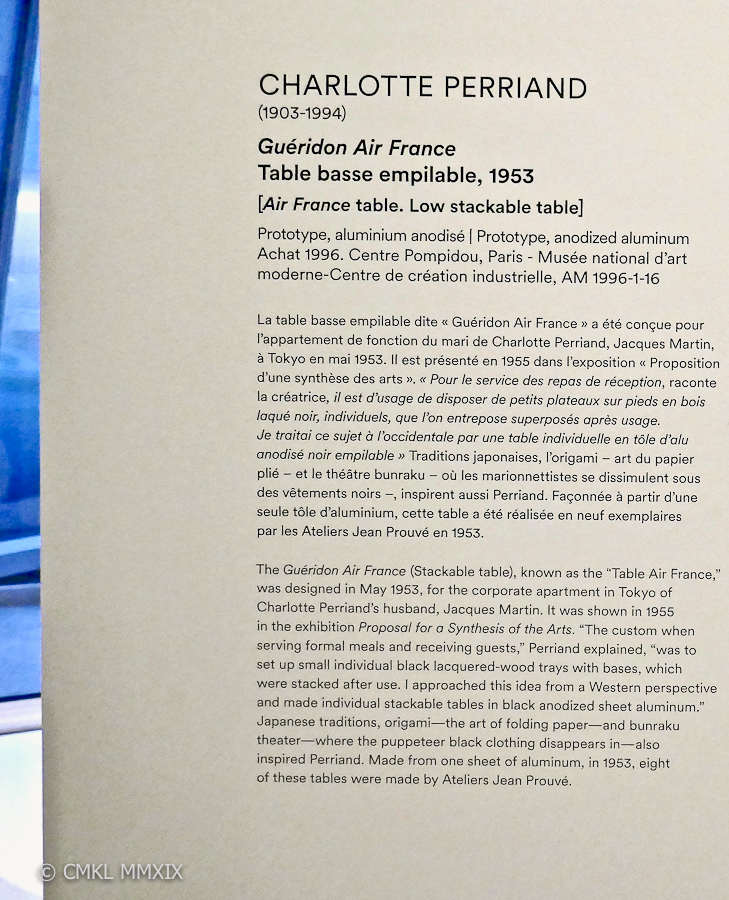 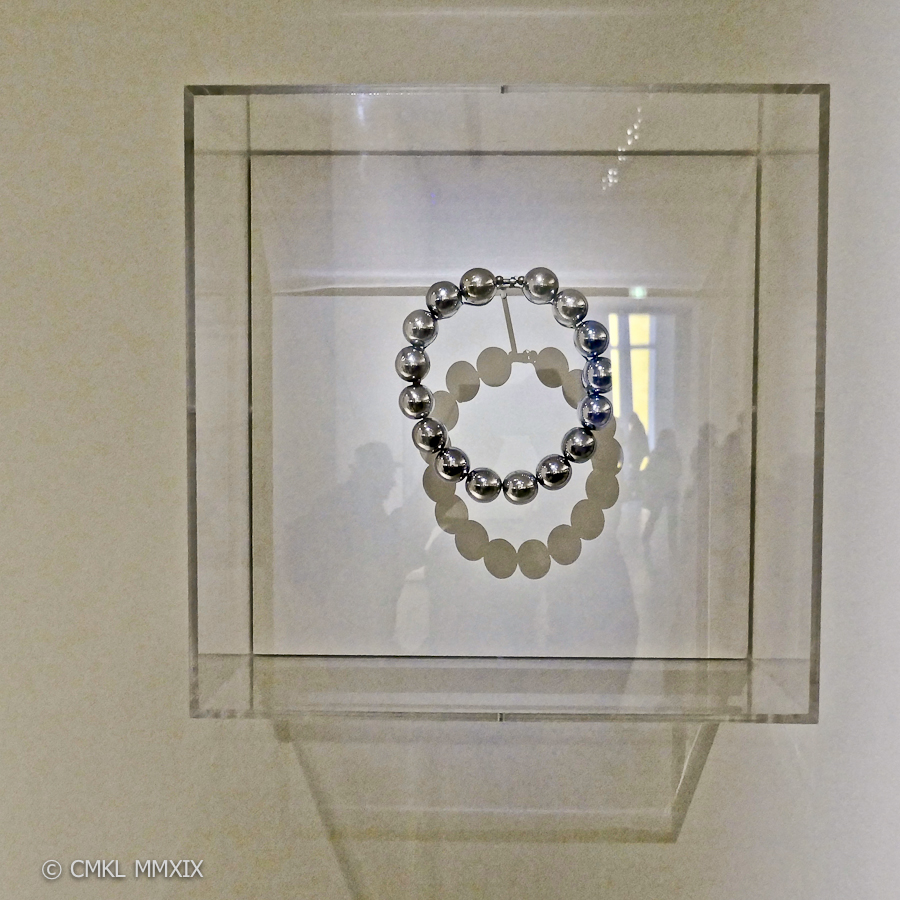 Charlotte may have had a street urchin’s haircut, but she dressed in stylish, avant-guard printed silk which reminded me of Aino Aalto’s fabric designs.

This New World of Charlotte Perriand & her Friends was a vast installation, absorbing it gradually turned into hard work. If we lived in the city, we could just pop in now and again to study it in increments, but for this visit, when excitement gave way to fatigue we snuck out. 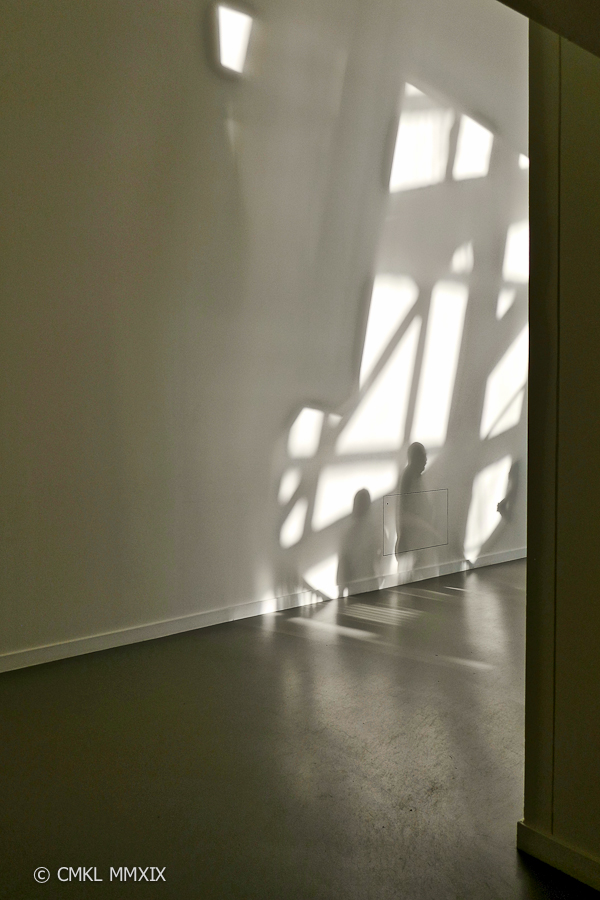 Descending via the terraces added a few more splendid views of the FLV and its environment, 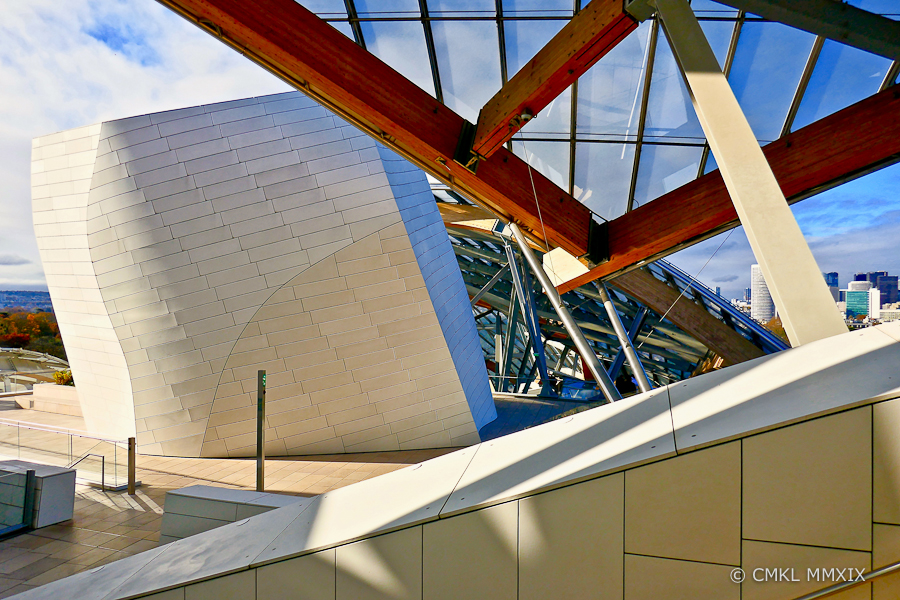 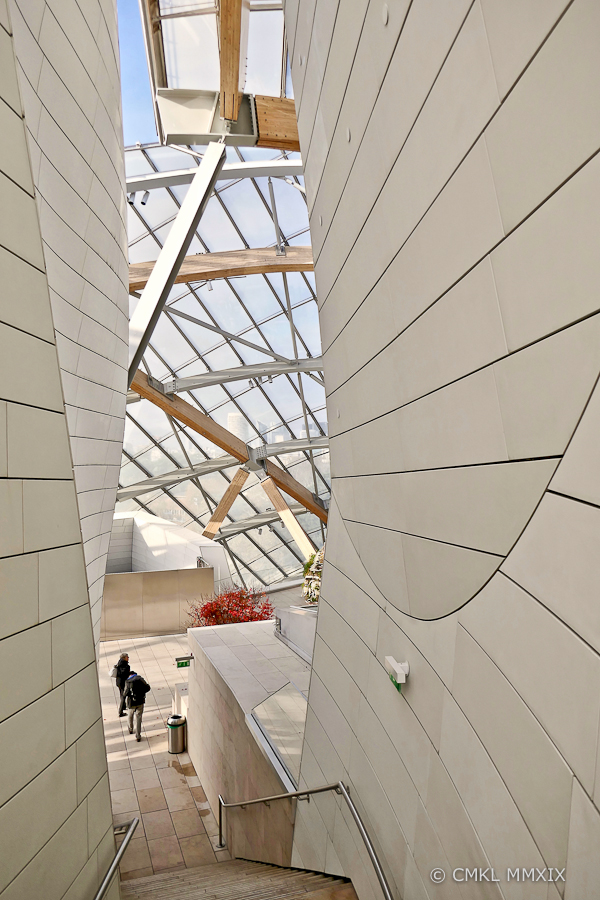 before catching the navette back into the city proper to find a cozy bar just off Boul’Mich to relax with a glass of wine.

The next day, we concluded a meeting in the 5th arrondissement and walked on Quai de la Tournelle along the Seine toward Pont de l’Archevêché when she first came into view. La Cathédrale Notre-Dame de Paris. And what a pitiful sight it was. 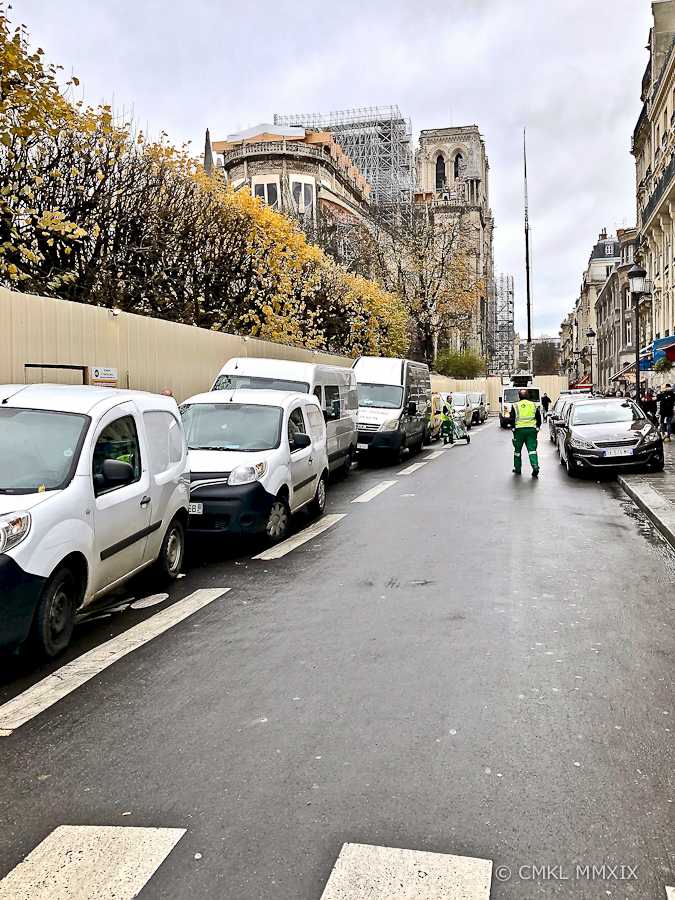 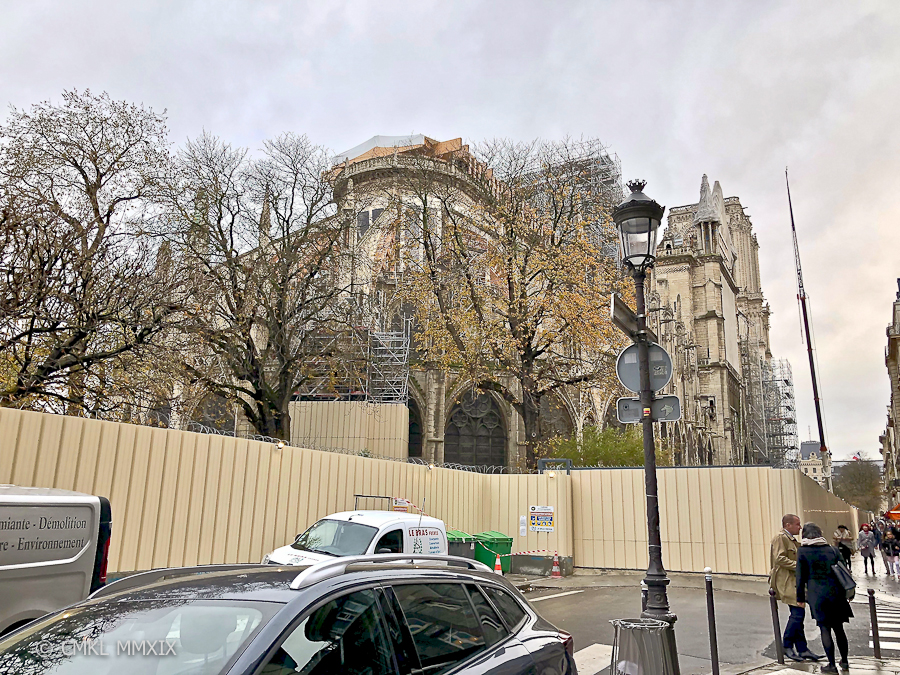 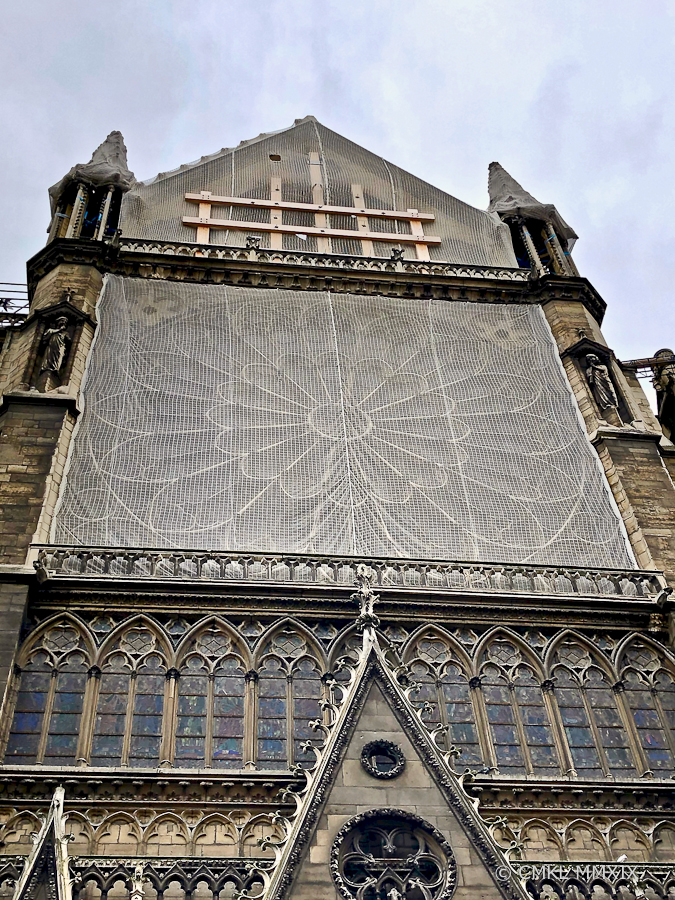 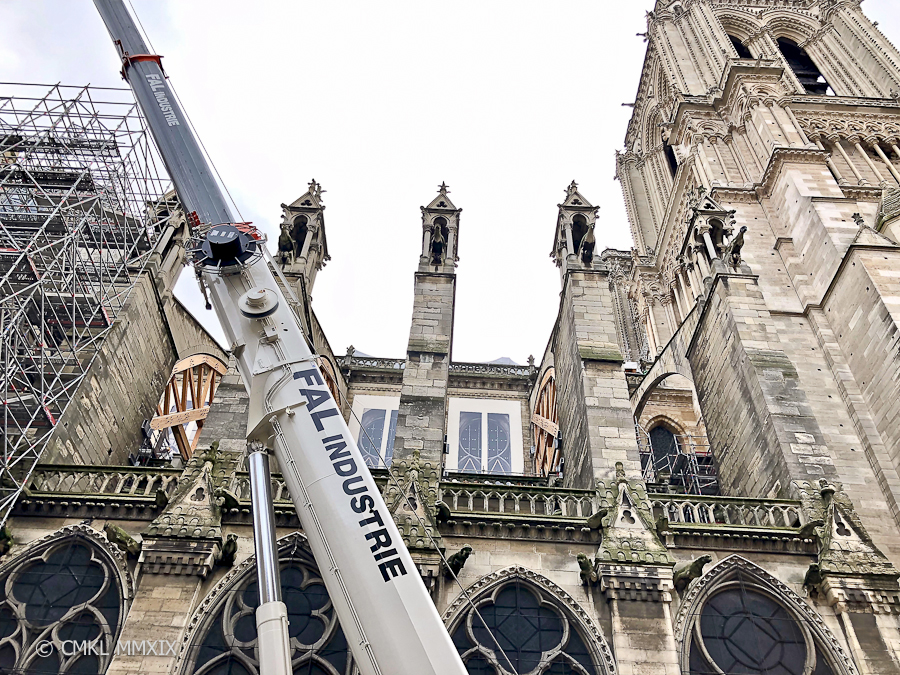 I have to tell you, it was painful to behold. To see the traumatic scars of the fire almost made you smell the smoke. This once proud, even arrogant symbol of Christendom had been brought to her knees without mercy. Yet, does not history tell us, this is the way the cookie crumbles? Have we not just returned from a road trip through a region that has never truly known peace until the fall of the Soviet Union? Warfare and fires have ravaged uncountable monuments many of which were subsequently rebuild, some more than once.

When I first saw the trailers, containers, equipment, and tents for the work crews destined to restore Notre Dame to her former glory, I was appalled. Upon reflection, I am inclined to change my mind. In a way, this is a fitting parallel to the time when the cathedral was first conceived. During the Middle Ages, artisans, above all master stonemasons, came from all corners of the known world to built churches and castles. They brought their families, apprentices, and auxiliary workers who in turn attracted merchants to supply goods for these communities – and thus the neighborhoods grew into cohesive units encircling the building site. Our tools may look different now, but the human element remains constant.

Notre Dame cathedral was built over a succession of Pagan and Christian places of worship since the time of Roman occupation. It took a hundred years to construct the cathedral during which time changes were made to the original concept. Since then, the building was tweaked and altered like any other edifice that has lived through the hardships of the ages. The spire that collapsed during the April 2019 fire, for example, had only been installed about 150 years ago. It replaced a more modest spire that had actually been removed about one hundred years earlier. If you look at the majority of historical buildings across Europe, you’ll see how they have evolved over time. Every era leaving its own stamp in design and upgrade to the specifications of that particular time.

For those reasons, earlier this year I had been pleased to see a great number of unique architectural submissions suggesting an innovative contemporary rebuilding of Notre Dame’s roof at a time when we all strive for greater sustainability. It is in keeping with the tradition of renewal and renovation that we have seen across Europe through the millennia to include, even emphasize the newest trends and technologies when rebuilding. Sadly, this will not be part of the resurrection of la Cathédrale Notre-Dame de Paris. Parliament decided that the cathedral shall be rebuilt in its former image, rather than progress into a twenty-first-century monument of modern humanity.