Skip to content
Posted on August 28, 2014October 3, 2018 by CMKL
This past Thursday turned into one of those days, when you really, really want to cuss and pound some one’s chest with your dainty fists. One of those ‘you have to be kidding’ kind of days. Thus I feel compelled to muse about human nature and other inexplicable natural phenomena, as for example, administrative rules and regulations in any given bureaucracy.
The banking rules in Costa Rica require all bank account holders to perform biennial updates of their personal data, including a verification that their account transactions are lawful. We have had a bank account for roughly three years now, but we had hitherto not been informed about this particular duty and have been blissfully ignorant of any such requirements.

We couldn’t enter our account online last Thursday morning, which didn’t perturb us unduly since both of us have our access denied quite routinely. The banking website has an unusually high failure rate regarding password acceptance. I don’t remember, how often I’ve input my ID & password (yes, I’m positive, I didn’t make any mistakes), only to be told that this is my third attempt to input an incorrect password and the portal shuts down. Slam bam, you’re done and imaginary little clown faces dance in front of your eyes, sticking their polka-dotted tongues out and wiggle their pointy ears. After these hallucinations have faded away, you regroup, you grit your teeth and either comport your butt down to the bank proper and request to be reinstated, or you can try over the phone, which sometimes works, sometimes not. By the way, I forgot to mention, I have never actually been given three chances to input my current and valid password, I usually get blocked on my first attempt. Oh well, it helps to regain one’s equilibrium through wildlife observations, while contemplating life’s idiosyncrasies … 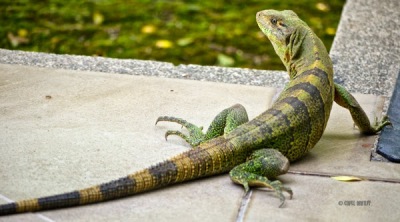 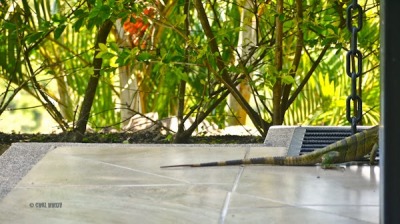 This Thursday, however, there was no easy solution to be had, and after an hour on the phone with the helpful, but clueless agent, we decided to make the needed transaction directly at the bank. At this point, we still believed to have just an online problem. Hah!

The teller couldn’t access our money either. My Spanish is poor, but I clearly understood ‘account’ and ‘frozen’. Not good. Dineros congelados don’t move well. Actually, they don’t move at all. It was time for serious action. We took another ticket from the lobby dispenser, this time for customer service, and waited in line, again, for a desk to become available. And then we waited a little while longer at the desk, while the bank employee plugged our information into her computer and had a whispered exchange with a couple of her fellow secret agents. Subsequently, we were finally educated about law 8204 and how it freezes your ass…ets if you don’t abide by it. We looked at each other and breathed just one word: Pablo. The lady on the other side of the desk caught our desperate susurrus and strongly agreed, yes, Pablo! She even wrote her name and phone extension on the printout, she had handed us, which explained the steps, we had to take to reinstate our account. Tell him to call me, she insisted.
Pablo is our lawyer. But that’s not even the beginning of it. His full name is Don Pablo Augusto Arias González. He was born and raised in Atenas, the youngest in a large family. This fully bilingual gentleman became our lawyer when we purchased our home here in Atenas. He also represented the four sellers of said home. All seven of us crowded together in Pablo’s office and completed the transaction in harmony. That’s Pablo. Before we ever had a bank account, which he eventually helped us to open, he allowed us the temporary use of his own so we could transfer cash for living expenses. He became our guide in all things Tico. He recommended the lawyer, who handled our residency proceedings in record time, he made sure, we got the new license plates for our car and so much more. His assistant Doña Cynthia is another shining light in our life. Let me just say, she is a marvel! Together they form an amazing & very effective team.
When we got to Pablo’s office Thursday afternoon, neither Cynthia nor Pablo was in, but we were assured that they would return shortly. Pablo’s offices are remarkable in their own right. When we first met him, he was practicing out of a building that also housed his cousin’s cyber café and gift shop. Since then, he joined forces with two other lawyers, forming AriasViquezRomán, Abogados y Notarios. And their new premises? Pablo’s childhood home! He bought his parents a new home for their retirement and the three partners renovated the old homestead, right downtown, two blocks off the courthouse and our lovely parque central. I believe, Pablo’s personal office is his former bedroom, overlooking a nice courtyard with a fig tree.
Cynthia returned to the office soon and sprang into action. She called the banker for further input about our situation, then ICE, the national electric company, to have them print out the document we needed for the bank. After a confab between Cynthia and the just returned Pablo, we received our instructions. We had to supply an accountant, with whom Pablo had made an emergency appointment for us, with a print out of our banking transactions for the last three months. Checking over those transactions with us and verifying their legitimacy, the accountant then attested to the kosher nature of our monetary activities for the bank, thus returning us to compliance with law 8204.
I don’t understand the banking business and I don’t know anything about Costarrican laws. Common sense, however, tells me that the accountant vetted numbers for the bank, which had supplied the very same numbers to the accountant in the first place. And now I’m ready to be vilified for having written the above.
Let me explain. I enjoy spending a little time on Facebook. Lately, I have noticed quite a lot of negative response to posts in pages or groups related to or about our town of Atenas. On one hand, there are Ticos, who would like to blame our community’s problems on us foreigners, on the other hand, there are foreigners, some of whom don’t even live in Atenas, who get their knickers in a twist over posts that might be critical of local conditions or politics. I have received criticism because I posted in English, rather than Spanish, and others were accused of fouling their own nest.
But this old lady, who according to psychoanalyst Eric Erikson is actually still eight months short of statistical old age, nevertheless has plenty of experience living and working in foreign countries. Early on during my years of living in the US, I would annoy my American husband no end by saying this or that was strange. No, he corrected me time and again, it’s foreign to you, but not to us. Saying it is strange, he would lecture me, sounds derogatory and judgmental. Well, let me tell you, some of those things needed judgment quite badly! On the whole, though, I have to agree with him, one has to be respectful. By the same token, it makes no sense to me to gloss over problems or gush about everything, simply because it might be expected of a newcomer and foreign national.
Reviewing my earlier paragraphs, am I then guilty of judging the banking procedure based on law 8204? No. I’m kvetching about a day in my life, in which it took two and a half hours, which felt like two and a half days, to correct a mistake we inadvertently had made ourselves. And I’m wholeheartedly grateful for the efforts of several kind people, blessed with goodwill toward us, who were instrumental in solving our problem so swiftly.
Are many government rules … weird? Definitively. Are there strange and inexplicable rules in bureaucracies across the globe? Definitively. Do I revel in moaning and groaning about some unexpected administrative hardship? Definitively.

What do we do to get over it? We cook, what else?

Dice a goodly amount of red onion, red peppers, and ginger and gently sauté all of it in a large frying pan.
Meanwhile, remove the chicken meat from its marinate & let come to room temperature.
Reduce marinate over medium-high heat.
Set aside sauteed veggies and brown chicken meat in vegetable oil at medium-high heat on both sides for about 2 minutes per surface. Season with salt and pepper.
Turn down heat to medium-low and tuck the vegetables all around the chicken meat in the frying pan.
Add a cup of freshly cooked black beans to the vegetables. Moisten the veggie mix with the thickened marinade.
Shake, rattle and rock the pan a little to mix things while listening to Fats Domino.
Cover and let the flavors amalgamate for 15 or 20 min. so that the chicken is just cooked through. Don’t dry out the meat by letting it simmer too long!
Allow to rest a bit.
Slice the chicken and serve with the vegetables over rice. If available, drizzle some fresh maracuyá seeds (pulp) over the meat.

Serve with mashed avocado:
In a mortar make a paste out of
.5 tsp dried cumin seeds, grind first by themselves to properly crush the seeds

scoop the ripe flesh of 2 avocadi (must be ripe enough to be smoosh-able, but still fresh and green) in a bowl and stir in the paste with a fork until well mixed, but still showing some larger avocado bits. Adjust seasoning as needed by adding more lime juice/pepper/coriander powder. Lastly, gently add another handful of chopped cilantro leaves. (Decorate with chives, if desired)
Note: this is not meant to be spicy guacamole. The condiment paste should enhance the avocado flavor through cumin/coriander and citrus.

P.S. So, last night we wanted to have dinner in town and stopped at the Cajero Automático, the ATM, for some cash, when … you guessed, right? Our card was refused. Back to the bank today. No big problem, ‘our’ customer service representative, Doña Andrea, had it all straightened out in a flash. Such things happen all the time, she said, not to worry. But when I said goodbye with a cheery ‘hasta mañana’, she rebuffed that idea with a quick, “no, no, not so soon!”. I agree!